The Teeth will show its “bite” one more time! 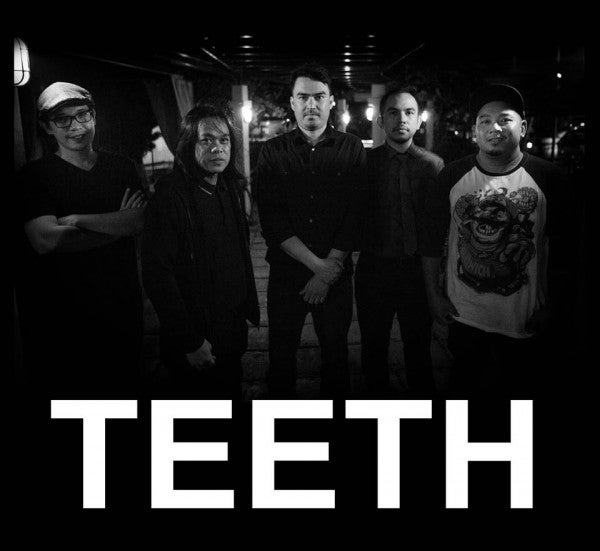 With the upcoming reunion concert of The Teeth, which will be held on Thursday, May 15, at the Metrotent in Pasig City, it got me thinking and reminiscing about a band that was one of the biggest Alternative acts of the 90’s… and at the beginning of the 90’s Pinoy Rock Boom, they were one of the leading acts in terms of popularity and name recall among music goers.

Would you believe that music fans still remember them now?

Indeed, how can anyone not recall the music of The Teeth since they released one of the greatest and most memorable anthems of that entire decade of the 90’s with “Laklak”? I have lost count of the many times we have heard their anthem for drinking which is still being played now anywhere you can imagine.

The Teeth are one of those local bands that because of their most memorable hit “Laklak” is truly identified and will forever be linked to a specific time–and that is the era of the 90’s–when you had bands that had the guts and the b**** to sing about what they wanted to. And whether it elicited a positive or negative response was immaterial to them.

In the case of The Teeth, they weren’t attempting to be different or radical. It was simply that their music was more of a reflection of those times and what they saw happening around them.

Whether it was lead vocalist’s Glenn Jacinto’s first taste of “froth” in “Laklak” when he took his first gulp of an alcoholic beverage and ended up enjoying it; or to going all out romantic when he was singing about his dream girl that he could only gaze from a distance while secretly wishing she could be his “Prinsesa”; or to singing about his teenage years and wondering where that chapter in his life went in “Shooting Star”–all these, you can definitely say, Glenn Jacinto was singing about important chapters in his life.

Thus, his life became an “open book.” Indeed, if you would pay close attention to his words and select songs from The Teeth, they were truly reflective of the state of mind of Glenn Jacinto then and perhaps that of other member’s, too. In what would be their last songs, they were already hinting at the eventual departure of Glenn Jacinto from his band.

And just like the namesake of one of the band’s last songs together, they were soon gone–just like a “Shooting Star”–as one of the greatest local alternative acts of the 90’s.

But even as they had ended their run, a few of their songs still lived on and were not forgotten. And that for me is a mark of excellence when a band that has not been active for more than a decade can still awaken memories with their fans and then remember them again–in this instance, The Teeth, each time we would hear their songs “Laklak” and “Prinsesa” being played, covered or performed.

The Teeth was further proof that when certain songs do capture a moment in time, they can live forever even well after the band is gone!

There was more substance to them than just “Laklak”

The Teeth were one of those very, very few local bands in the 90’s that I was never able to purchase any of their albums–either they were sold out or not

It was already in the heels of the disbandment of The Teeth, in 2002 or 2003, I think, that I was able to buy a copy of a compilation of their music. And that was because a ‘Greatest Hits’ package was released by Warner Music Philippines and it contained practically all their best known songs and some I had never heard of. Plus, a bonus VCD was thrown in which included a few of their memorable live performances.

Then, in 2005 again, another ‘Greatest Hits’ package was released. It was, in fact, the same set of songs but just in a different track listing. I purchased that also since I was a fan of the band.

If The Teeth were a one-hit wonder type of band, why would there be two ‘Greatest Hits’ releases since the time they had already disbanded?

I don’t know how old I was at the time when I was watching a news special that centered on the so-called “negative influences” of certain local rock songs coming from a few of our finest bands during that decade. And I don’t say that with a hint of sarcasm since The Teeth was one of the best in those years!

Back on this sub-topic. While I don’t have a complete memory of that moment in my life, I do recall a few important details, though, of that particular show and I clearly remember that there were two bands being singled out and were the focus of attention for almost the entire duration of that news special–The Eraserheads for their song “Alapaap” and The Teeth for “Laklak”.

Guess who got the worse end of the two? The terribly misinformed anchor (by her irresponsible and clueless research team?) of the news show was interviewing a politician who was citing some of the lyrics of “Laklak” which he claimed promoted irresponsible drinking, and even drug use (in a bid to be politically correct?) concluding that the song was sending a wrong message to kids!

I have no doubt that the politician felt he was doing the “right thing” by raising his concern while there was no guessing either for the viewers that he was also being obviously politically motivated, there were those of us, of course, who disagreed with his views because it would mean it could curb the freedom of expression of our local artists and limit what they could say in their own songs.

Well, here is my take on that! Just because you enjoy listening to songs like “Laklak”, it doesn’t necessarily mean that you drink or take drugs as a matter of fact. How myopic is that perception, anyway? Believe it or not, some of us then young music aficionados just enjoyed the heaviness of the song, and how Lead Vocalist Glenn Jacinto seemed to not sound like any other vocalist at the time.

When you are that young, you are more attuned to the melody and the fire of the song, without introspecting deeply into its lyrics and message.

“Laklak” struck a chord and got everyone’s attention!

One last toast to The Teeth

The Teeth was a fun band to listen to. And like all great bands, their music provided us momentary escape from our sometimes humdrum lives and made us imagine what it could have been if we ourselves were “rock stars” like them enjoying the fame, glamour, and yes, even the notoriety of their lives.

Because haven’t we all wished, especially when we were in our teenage years, to be “rock stars”? And we weren’t even talking about the abused cliche that it is all about: “Sex, Drugs, And Rock N’ Roll! It was just about the celebratory Rock aspect of it all and wishing to be able to perform in front of an appreciative crowd!

The Teeth were an awesome band in their heyday!

I do believe that is the reason The Teeth was able to leave their indelible bite mark in Pinoy Rock history!