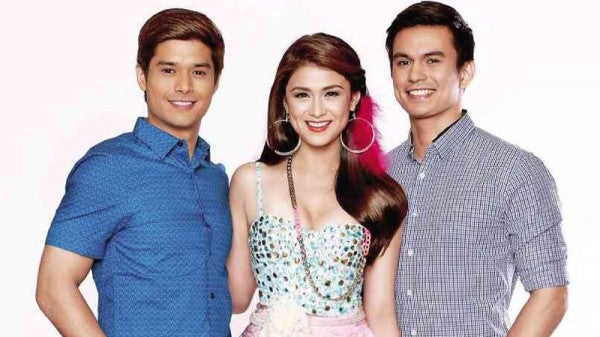 DE VERA, ABELLANA AND RODRIGUEZ. Figure in a romantic three-way in “So It’s You.”

Which self-respecting woman would share her bed with a good-looking stranger, even in the guise of kindness? Carla Abellana does just that in Jun Lana’s “So It’s You”—and even attends her ex-fiancé’s wedding!

The fun but frothily predictable rom-com casts the pretty actress as Lira Macaspac, a kooky, “exceedingly” fashion-forward medical representative who gets her heart broken when her dashing groom, Tony Ferrer (JC de Vera), leaves her waiting in vain at the altar.

The situation gets dicier when Pauleen inexplicably breaks up with Tony, and gives Lira the perfect timing she needs to get back the man who, she believes, rightfully belongs to her—but, at whose expense?

The sensitive Goryo has fallen in love with Lira, but she’s too caught up in her calculated ruse to notice. His admission throws everything off-balance. When it looks like Lira will finally get what she wants, she realizes that there’s more to life than manipulation and vengeance.

Lana breezily handles this hefty wedge of exposition and back stories, and comes up with a zippy and entertaining first act. Unfortunately, it goes off-kilter when implausibilities rear their ugly heads and, as a result, muddle the narrative.

True, the film’s feather-light tone shouldn’t be taken seriously, but you still need a whiff of believability to suspend disbelief that a supposedly smart albeit indecisive woman hardly notices the red herrings and red flags staring her in the face.

That said, we must note that this is the most fun we’ve had with a “mainstream” film by Lana—it’s devoid of the annoying and irksome excesses that made “Yesterday, Today and Tomorrow” and “My Neighbor’s Wife” underwhelming viewing experiences.

(His forays into indie filmmaking, like the precious “Bwakaw,” are another matter, however—and we can’t wait to see the festival-circuit favorite, “Mga Kuwentong Barbero,” which has yet to be shown in local theaters.)

De Vera looks good and carries himself confidently in pretty much a disposable role, and there’s no attempt to clarify why he does what he does—he is what his one-dimensional character requires.

Rodriguez has a likable presence and is just as photogenic, but he needs to do something about his distracting speaking voice, which tends to crack “dramatically” when he delivers his lines.

On the other hand, his bedimpled leading lady is no slouch  at showing dramatic moments of wistfulness and grief, but doesn’t quite exude the kookiness required by the role—think Jolina Magdangal in her ABS-CBN heyday. This makes for a “prettified” but half-baked characterization.

The script explains Lira’s tacky excesses, however—her loving but loony family became nouveau riche when her father won the lottery five years ago. The lovely Abellana plays her too prim, polished and proper, and carries herself as a sheltered kolehiyala would—which is alright if you’re going for shallow and insubstantial.

For someone as “thespically able” as she, Carla should learn to lose herself in a role—and not just settle for “OK na ‘yan!”