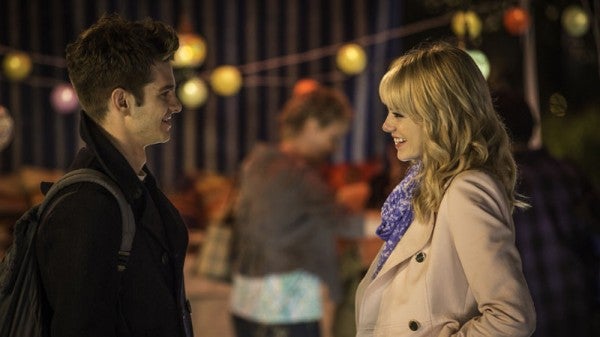 MANILA, Philippines—Fans of Andrew Garfield and Emma Stone are in for a treat – or in this case, a laugh trip – after the two starred in a “Saturday Night Live” (SNL) skit that featured not one but six awkward kissing scenes.

The “Amazing Spider-Man 2” lead stars spoofed a romantic scene from their latest film, with comedian Taran Killam acting as the director.

In the skit, the real-life couple couldn’t quite get the kissing right as they embarked in a number of hilarious and uncomfortable poses with their mouths open and their tongues wagging.

They touched tongues, shared a pocket of air and even pressed their mouths, which were wide open, together before Coldplay vocalist Chris Martin volunteered to help.

“I could give it a try if you like,” Martin said.

More laughter ensued after Martin carried Stone off the set so he can portray her role as Gwen Stacy to Garfield’s Peter Parker.

Wearing a blond wig, Martin swooped in for his own version of an awkward kissing scene.

The video of the parody has gone viral, with many fans calling it one of the funniest SNL skits ever.

Indonesian boy, 5, leaps to his death after failing to watch ‘Spider-Man’