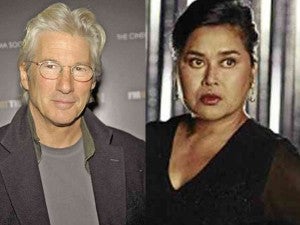 GERE AND OROPESA. Bracing affirmation of the “survival” of the human and humane impulse to help others.

Unexpected opening question: What do Richard Gere and Elizabeth Oropesa have in common—aside from their both being stars, of course?

Similarly unexpected answer: They’ve both figured in TV features in which they deglamorized themselves to look like derelicts in desperate need of help—to see if anybody would rush to their assistance!

Elizabeth did “guinea pig” duty on a “Wish Ko Lang” show where she was “uglified” and rendered unrecognizable to play an old fish vendor whose kariton hit a bump in the road, spilling its contents. Would anybody come to the helpless old woman’s rescue? Inspiringly, three barkada mates did, and the lola was effusively grateful!

Not only did the three friends help “old” Elizabeth to her feet, but they also pushed her cart all the way to her “home”—where she promptly took off her wig and makeup, and her young knights in shining armor realized that they had been “had!”

But, it was all for a good cause, because viewers were given concrete proof that, contrary to some cynics’ fears, chivalry is not dead on the streets of Metro Manila—a proud moment for everyone involved!

For her part, Elizabeth really got into the spirit of the test, acting really old and pathetic, making it crystal clear that her Good Samaritans would have done the same for anybody else in similar need of assistance. The boys got some goodies and prizes for their pains, but it was clear that they helped Lola Liz out of the goodness of their hearts, with no thought or expectation of acknowledgment or recompense.

The successful “experiment” left a glow in viewers’ hearts, and we hope that it reminded them to also be helpful whenever strangers ask them for help.

What about Richard Gere? His “incognito” moment came more recently, when he passed himself off as a scruffy, hungry bum, similarly to see if anybody on the mean streets of a big city in the United States would help him. We’re happy to report that the answer in his case was also in the affirmative.

As he “hungrily” went through the contents of a garbage bin, a female stranger stepped up out of the blue—and gave him her uneaten sandwich!

As in Oropesa’s case, the American “angel” was stunned when she discovered that the bum she was helping out was the famous Richard Gere—and US viewers similarly found the feature a bracing affirmation of the “survival” of the human and humane impulse to help others.

The fact that two celebrities agreed to participate in the instructive “experiments” enabled them to reach many more people with their inspiring “message,” so both stars should be thanked.

We’re also grateful to “Wish Ko Lang” and its American counterpart for staging the “test situations” to bring out the Good Samaritans who are still out there, despite cynics’ negative view of human nature today. Let’s have more such affirmative “experiments,” please!