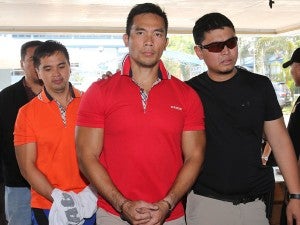 MANILA, Philippines — The National Bureau of Investigation (NBI) on Monday presented to the public the arrested suspects in the mauling of actor/TV host Vhong Navarro.

The two were arrested Saturday 11:15 a.m. in a remote area in Oras, Eastern Samar by members of the NBI in cooperation with the local police.

De Guzman said they will return the warrants of arrest before the Taguig Court on Monday while the two will remain at the NBI until further orders from the court.

Lee, Palma, Fernandez, together with Deniece Cornejo and Ferdinand Guerrero were ordered arrested by the court in connection with the serious illegal detention case filed by Navarro and the NBI.

Read Next
‘Other Woman’ curbs ‘Captain America’ with $24.7M
EDITORS' PICK
Experience clearer calls nationwide with Smart VoLTE
Tracing app pesters MRT commuters
New Year, New Rediscoveries
Senate probe foils vaccine overpricing
Editorial: Unusual haste
Driving can be even more rewarding this New Year — here’s why
MOST READ
Duterte to firms: No franchise until you settle your accounts with gov’t
7 copassengers of UK variant patient can’t be traced
Norway advises caution in use of Pfizer vaccine for the most frail
#DefendUP trends after DND scraps agreement with UP
Follow @T2TupasINQ on Twitter
Don't miss out on the latest news and information.