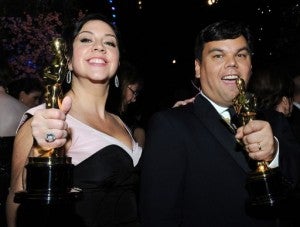 Manila, Philippines—Filipino-American Robert Lopez and wife Kristen Anderson-Lopez, the composers behind the official soundtrack of Disney’s animated blockbuster “Frozen,” have been included in Time magazine’s Most Influential People for 2014.

The list features personalities considered as titans, pioneers, artists, leaders, and icons. Lopez and Anderson-Lopez were included in the artists’ group along with the likes of actresses Kerry Washington and Amy Adams, 12 Years a Slave director Steve McQueen, Oscar-winning actor Matthew McConaughey, and singer Miley Cyrus.

South Park creators Trey Parker and Matt Stone, who wrote the couple’s profile in Time, praised them for their smart approach into composing music.

“They are both completely steeped in the traditions of Broadway musicals, but they’re really smart and would never be happy just regurgitating what’s come before,” Parker and Stone wrote.

In a video published in Time’s website, Lopez and Anderson-Lopez cited their parents and each other as the most influential people in their lives.

Earlier this year, the couple won an Oscar for Best Original Song for the megahit “Let it go.”

In 2013, President Benigno Aquino III was named as Time’s 100 Most Influential People. The same honor was bestowed on boxing icon Manny Pacquiao in 2009.