Persistence pays off for The 1975 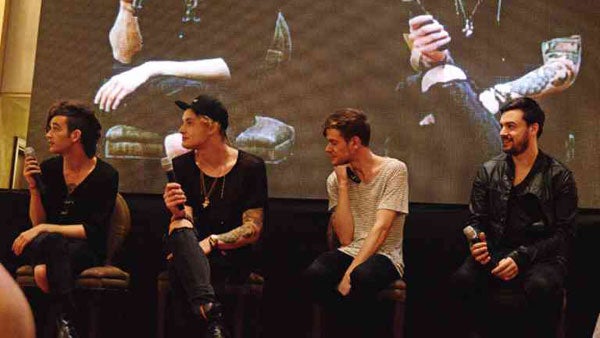 British indie rock band The 1975’s debut album landed No. 1 on the UK charts last year, and though the band had been playing for 10 years prior to their first hit “Chocolate,” no record executive back then would take them seriously.

“We didn’t get signed… [record executives] were all really scared,” lamented Matthew “Matt” Healy, lead vocalist and guitarist, during a recent press con for their Ayala Malls tour.

“Every other song sounded totally different—they weren’t very happy with that idea. We said to them, ‘No. That’s the way our generation consumes music.’ We didn’t get signed; we just did it ourselves.”

Matt and the rest of The 1975—Ross MacDonald (bass), Adam Hann (guitar) and George Daniel (drums)—were classmates in a Manchester, England school when they formed the band 12 years ago. Most of them were just 13 then.

Why The 1975? The band got its name from a scribbling on the back page of a poetry  book dated “1 June, The 1975.” Other names they considered included Me and You Versus Them and Forever Enjoying Sex.

The band clarified that there has been no collaboration with fellow British act One Direction. “We’re writing a song for them,” Matt said, playfully adding, “Actually, we’re doing them a favor.”

The 1975 met the boy band at the studio, and they started playing around with ideas. “They’re like 19-year-old boys,” Matt quipped.

Members of The 1975 are in their mid-20s, and were inspired by artists like Peter Gabriel, Talking Heads, and even R&B acts like Ashanti and Boys II Men.

Matt likened their self-titled debut album to “a diary, a scrapbook of ideas.” “We’ve naturally created quite a cinematic sound of music. We write music on the tour bus, even here in the Philippines. We have to write in the moment.”

In the Philippines, the single “Girls” is getting regular airplay, and the album recently hit the top spot of a music store’s bestseller list.

Matt’s advice to aspiring bands: “You just need to be really good. It’s 2014; you don’t need a big record deal.” Bandmate Ross reminded him, however, “We are signed to Universal.”

Matt rebutted, “Yeah, but they didn’t do anything. Before we got signed, we’ve been a band for 10 years. We famously not got signed. We put ‘Chocolate’ out and then  that’s when we got signed. The initial hard work was done by ourselves. That’s what you need to do.”

The Internet plays a major role in the band’s popularity, but these chaps just want to make their music, pure and simple. “We don’t convey our personalities online because it dilutes things. Like Led Zeppelin—there’s just a record with a photo of them, a press shot where they stood in front of their own  f***ing plane, one interview a year that they didn’t take seriously. They were rock stars. People knew nothing about them.”

Still, Matt added, The 1975 members  don’t feel like stars. “The music is very honest but our social projection is very reserved… Everything you got from Michael Jackson was a predetermined, controlled idea of what he wanted you to think. That’s when you get pantheons, people who feel [they’re] above [others]. We don’t want to be like that. We’re humanists.”