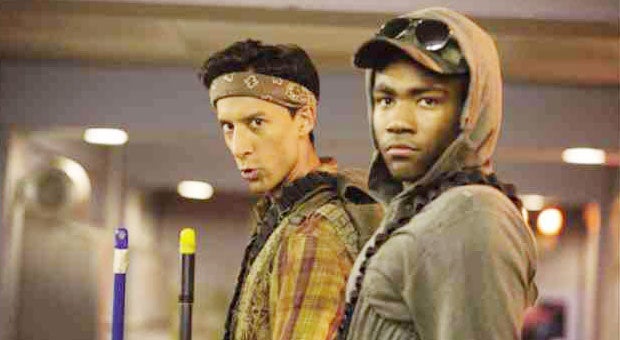 “To be honest, I didn’t know about [‘Doctor Who’ or ‘Dungeons and Dragons’]. But I’m learning while I’m shooting,” revealed “Community” actor Danny Pudi, somewhat stunning the gathering of fans during the recent meet-and-greet at the Fox office in Bonifacio Global City.

Pudi, after all, plays super-geek and aspiring filmmaker Abed, the almost-robotic member of the show’s community college study group. The sitcom continues to parody pop culture trends and fan-favorite franchises.

The actor, 35, was in town to promote the series’ fifth season (debuting on Fox April 23, 9:50 p.m.). Pudi pleasantly surprised devotees by hugging them, jumping, running around and dancing, coming off as genuinely excited, if over-caffeinated. He sat down, sans hyperactive behavior, for a one-on-one interview with the Inquirer.

How will actor Donald Glover’s departure this season affect the show? His Troy character and Abed share a unique bond.

Donald leaves after the fifth episode. It is tough for all of us. He is a good friend of mine. I like hanging out with him, listening to his music. He’s a genius, comically. It’s tough as an actor, too, because the Troy and Abed dynamic is so fun, and I’m gonna miss that.

One of the things that we do this year is address, head-on, the fact that he’s leaving. You see Abed trying to connect with other people, and he can! There are two episodes after Donald leaves where Annie and Abed are trying to find a new roommate. In another episode, Abed has a conversation with a character played by Jonathan Banks from “Breaking Bad.” You see how much he’s trying.

How different will it be, now that Abed is going to have a girlfriend?

It’s not that different. Ultimately, it’s about the study group.

Which actor are you closest to?

Who’s the funniest to you, off-cam?

What are you learning about playing Abed for a fifth season?

I’ve learned a lot. I learned more about pop culture than I ever knew. I’m not an expert, so Abed has helped me learn about “Farscape,” “Doctor Who,” “My Dinner with Andre”… I’ve also learned that he has a tremendous capacity for connecting with people. He’s way less weird, and way smarter than I am!

What geeky stuff are you into?

I love graphic novels. I’m reading “Saga” right now. “The Unwritten” is awesome. “Fables”… those are the things I get into the most right now.

Now that creator Dan Harmon is back, how does the cast feel?

We love it. We’re so happy and thankful. It was amazing because it was a chance for us to start all over again. No one knows the show like Dan. He’s the brains of the show. [The previous season], it was just different. Our show is so specific and a part of Dan Harmon and his life that to take it away and have someone else do it is a very hard task.

Losing Chevy Chase—how did that affect you?

The thing about our show is, we’re constantly changing. There’s always stuff happening. The good thing is we had Dan come back. We lost Chevy; we lost Donald, too. At least we have Dan there to write about the characters in a very honest way. I’m just happy I got a chance to work with Chevy.

To what do you attribute “Community’s” success?

I don’t know… It’s pretty amazing. Our show is different. But it’s also current, topical. It embraces things that are happening right now. Dan and the writers are very involved [in] social media so they’re able to tap into what’s currently on people’s minds. It’s a very honest show.