2NE1 returns to Manila with “All Or Nothing” Tour | Inquirer Entertainment

2NE1 returns to Manila with “All Or Nothing” Tour 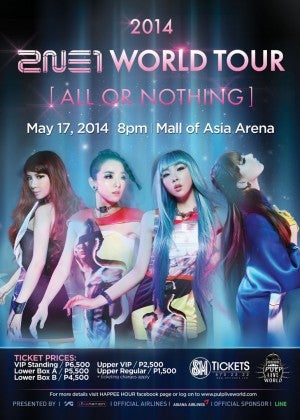 MANILA, Philippines – PULP Live World ushers the return of 2NE1 with their All Or Nothing (AON) 2014 Tour. Celebrate the group’s 5th anniversary with them and fellow Blackjacks on May 17, 2014 at the Mall of Asia Arena, Pasay City.

2NE1 is a four-member Korean Pop group formed by YG Entertainment in 2009. The group consists of singers CL, Minzy, Dara, and Bom. The group debuted in May 9th of the same year with the chart­hitting single, “Fire.” The song gained an instant huge success in South Korea and topped all online and offline charts.

Since their inception, 2NE1 have released four chart­smashing hits, two EPs, and two studio albums supporting five headlining tours under their belts. In 2012, The New York Times named 2NE1’s performance at the Prudential Center, New Jersey as one of the “Best Concerts of 2012.”

2NE1 Live in Manila is produced by PULP Live World. Tickets are available at SM Tickets. For more information, visit www.pulpliveworld.com and www.pulpmagazinelive.com