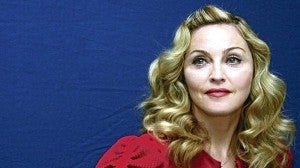 MADONNA: “I’ve always been adventurous in a creative way.”

MIAMI, Florida – We left Toronto with a first-time experience – we finally got to interview Madonna. Dressed from head to toe in Yves Saint Laurent, her blonde hair a mass of curls, Madonna evoked Marilyn Monroe’s old Hollywood glamour.

She arrived at the Park Hyatt with an entourage that included a publicist, stylists and bodyguards. At the end of the interview, when she had to pose for additional photos, Madonna balked at standing by a window with drapes open. The publicist instinctively drew the drapes but Madonna, ever the style-conscious maven, opened the drapes a little bit for dramatic effect.

Visual style is also one of the strengths of Madonna’s second directorial work, “W.E.,” which some critics slammed at the recent Venice International Film Festival. In Toronto, we saw for ourselves the Material Girl’s film on a modern woman, Wally Winthrop (Abbie Cornish), whose unhappy marriage is intercut with her fantasies of the famous love story of Wallis Simpson (Andrea Riseborough) and King Edward VIII (James D’Arcy). The film is weak on the script but it’s not bad at all.

Madonna the filmmaker also deserves a lot of credit for drawing excellent performances from her cast, especially Abbie and Andrea. The latter is especially outstanding as the elegant American woman who inspired Edward to give up the throne.

Quick with a witty retort, Madonna made a passing quip about an incident in Venice in which a fan gave her hydrangeas. It turned out that the pop star “absolutely loathes hydrangeas,” a quote she made, unaware that her microphone was live. She coquettishly held a fan which she did not open throughout the interview. Below are excerpts:

King Edward III gave up the throne to be with Wallis Simpson. What have you given up in the name of love?

When you love someone, you always find yourself making some kind of a sacrifice. That’s the nature of love. I love my children very dearly. I have to make sacrifices for them on a regular basis.

What do you teach your daughter about the role of women and relationships?

As women, we look at relationships and we say, “Oh, this is the kind of man that your parents want you to be, your friends think you should be with, would approve of, etcetera.” Maybe they look good in paper but they don’t actually turn out to be right for you. So it’s an important message for my daughter, at her age, to understand that we have to make our own decisions. We have to make our own way in life and cast off society’s expectations of who you should be with.

I can imagine that a man would give up anything for you.

I wouldn’t count on that. While I was researching this story, I asked myself the same question. Wow, what must it feel like to be loved that much only to find out at the end of the story that it was a great weight of responsibility on her shoulders.

Does that mean you know how it feels to be loved like that?

I know how it feels to be loved a lot but no one has ever given up his kingdom for me.

How do you deal with the high expectations some people have of you as a director?

I am not sure what expectations people have of me as a director, as I only made one film previous to this. You have more expectations of people when you’ve seen their works before and then you expect their new work to be as good as their previous work. People are more critical of me than, say, an anonymous director because I’ve been successful in other areas in my life. I do feel the pressure, yeah.

How did you get the permission of Mohamed Al-Fayed, who owns the former home of Edward and Wallis in the Bois de Boulogne?

I just knew he was the owner of the estate and he had auctioned off a majority of the estate. But he still owned the Bois de Boulogne and I wanted to not only film there but also to use his likeness in the film. So I needed to get his permission. I also knew he was in possession of many of the letters between the Duke and the Duchess. So I had many reasons to want to meet him. He was extremely generous and forthcoming.

As soon as I came into his office, he opened up books and pages of letters to let me look at. He didn’t let me walk away with any of them. We had several meetings. He wanted to see the script. He wanted to know how he was portrayed so I had to give him the scenes that were written about him. And they met his approval (laughing). Then he gave me permission. I agreed to help him with the charity that his daughter was in charge of, a school for underprivileged and abused children in England. So it was a tradeoff. I helped him with his daughter’s charity and he let me film in his house. I think that was fair trade.

How challenging was it to depict the grandness of the 1930s and keep it intimate at the same time?

Extremely hard. You want to have the authenticity of the period. You want to have the grand sweeping elements of the period to show the life of luxury that these people lived. But at the same time, if you keep it grand and sweeping the whole time, you don’t get to know the characters, so you need to have intimacy with them as well. Having the combination of the two was important to me.

Did you consult Sean Penn and Guy Ritchie and showed them this film’s script?

I never showed the script to Sean. I only talked to him about making the film. He’s always been supportive of me as a creative person.

When I was writing, I did give the screenplay to Guy at a certain point. I also shared the concepts, stories and ideas with Guy because he was also interested in the story from a historical point of view. They never really gave me specific advice about telling this story but Guy would give me technical advice about cameras or using digital versus film or one cinematographer being better than another or one sound mixer being better than another.

Antonio Banderas was in the same seat as you are on now. Your “Truth or Dare” was mentioned and in that documentary, you said…

That I was dying to meet him, yeah. I used to have a terrible crush on him. It’s true. I think he’s taken.

How good is your support system?

I have a good support system in general. I have a great crew of people that I work with. The creative team that I was making this movie with me was extremely supportive. My children were extremely supportive of me and forgiving me of all of my absences. My friends and family – yeah, everybody was encouraging.

Have people tried to box you in?

People have opinions about what they think I should and shouldn’t do but no, I’ve never felt someone say, “You cannot do this.” When I moved to New York, I was a dancer. I’ve always been adventurous in a creative way. I never imagined for a minute that I was going to be a singer and a song-writer but I left myself open to experiences, auditions and meeting people. One thing led to the next.

I was open to things even though I was trained as a dancer. When somebody said, “Hey, why don’t you try auditioning for this record producer or this musical?” I didn’t say, “Oh no. I’m a dancer. I can’t do that.” I just said, “Why not?” So for me, moving from all of these things to making a film isn’t really that big of a jump because it encompasses everything that I love.

You are also an actor. But now that you have directed your second film, do you think that you found your niche?

I prefer being a storyteller. As an actor, you are obviously an integral part of the film but it’s not really your point of view. It’s a mistake to think that I’m in control of everything even when I’m onstage and going on tour because, for instance, I can’t control the weather or whether one of the dancers injures himself. There are all sorts of things that happen that I can’t control.

One has to roll with the punches but it’s always good to be as prepared as possible. Being a director means you have to learn how to deal with disappointments gracefully because every day, you hear the word “No” a thousand times. No, that can’t happen. No, we don’t have time for that. No, that’s too expensive. So I’m trying to work with those kinds of restrictions. Being creative is a real challenge but I enjoy it.

The film shows Wally attending these high end auctions. When was the last time you were at an auction?

There was an auction of Tamara de Lempicka paintings about two years ago. I didn’t get anything because they were too expensive.

What drives you crazy?

What drives me crazy besides hydrangeas? People who aren’t prepared.

Can you talk about the filmmakers who inspired you, especially on this film?

I was inspired by various filmmakers for various reasons. I was inspired by Ingmar Bergman’s film “Persona” because it’s the story of two women who have this symbiotic relationship and, in many ways, they switch positions. By the end of the movie, you’re not sure who’s the crazy one and who isn’t. The nature of their relationship was interesting to me.

I’m also a really big fan of Alain Resnais and his film, “Last Year at Marienbad.” I loved his use of camera movement and filming in long tracking shots down hallways and mirrors. That film was cutting edge for its time. It broke a lot of rules about filmmaking. People really understand it. In fact, I watched a documentary about the film. All the actors would show up on the set every day. None of them even had a script but they were so in awe of the director that they were willing to just be there, wait and hear what he wanted them to do. I was fascinated by the fact that the actors were willing to take this risk and that he was willing to take that risk, too. He was a big inspiration.