My spiritual adviser’s message to the stars

When I first met Fr. Eugene Elivera, MA, SThD (rector and principal of Seminario de San Jose in Puerto Princesa, Palawan), I had no inkling that he was a priest.

He is also the author of “Morality of the Heart.” We were introduced by a common friend at the bar The Crowd  during the anniversary concert of the band, Jeremiah.

How uncanny that I found a spiritual adviser in him while I was downing “spirits” of a different sort (vodka). Father Eu is not like some priests who are strict and uptight. He is über-cool, that’s why we clicked instantly.

Father Eu was the one who officiated at the wedding of Karylle and Yael Yuzon.

Celebs need a kindred spirit like Eugene to help them maintain a sense of equilibrium amid the dizzying show biz circus. 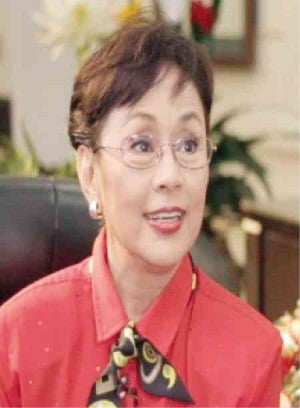 GOV. VILMA Santos should join the Church in working in behalf of the needy.

In observance of Semana Santa, I asked Father Eugene to share his prayers for some stars. And to break the solemnity a bit, he included  some anecdotes about Karylle and Yael.

May the Holy Week leave you feeling whole and no longer weak on the inside.

“I pray that she will devote a part of her time to the Church because of her immense influence on people. 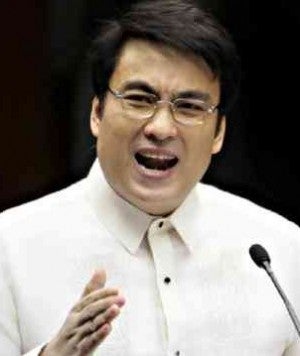 “The church has always undertaken and still undertakes an immense work in behalf of the needy, of those who suffer, of all those who bear in any way the consequences of the only true evil, which is sin.

“I pray for her, that someday she she can become an ambassador to the Holy See.”

“Firstly, I pray for their respective families. May their trials keep them all the more united and strong for each other. Then, I pray for both of them to put their hearts aside. Duty comes first. But when fulfilling their duties, put heart into them. It helps. I pray for the truth and that justice will be served in the end.” 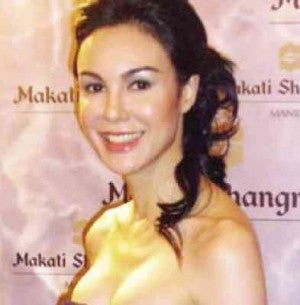 GRETCHEN Barretto should remember that “love for parents” is the sweetest precept.

“The commandment to love our parents is considered to be the sweetest precept. Do not neglect your obligation to love your parents more each day … to pray for them and to be grateful to them for all the good you owe them. I pray also for peace and harmony in the family.”

“I pray for good health [because] she is working hard for her two children. May true love find her; for only true love will accept her for who she is and not for what she has. I would like her to meditate on this: ‘I am asked for very little compared to how much I am being given. The more generous you are for God, the happier you will be.’”

DANIEL Padilla should inspire the youth.

“May he make use of his youthfulness to inspire young people through confidence and hope in God. For him to become an ambassador for young people in showing love for parents and family. May he meditate on these lines: ‘More should be asked of you because you can give more and you should give more.’” 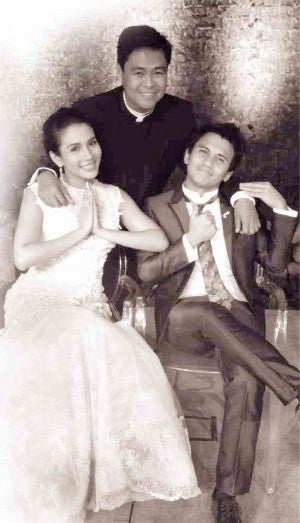 FATHER Eugene Elivera (center) prays that newlyweds Karylle and Yael Yuzon will be the best of friends forever.

“May they enjoy marriage forever. Persevere to be the best of friends to each other. Continue to create music together. Be useful. Make your presence felt. Shine forth with the torch of your faith and love … And to bear children soon!”

“Glitter is temporary. Take this opportunity to really shine. Shine but be deeply rooted in the One who gives you true light. Shine by exemplifying moral values. Pray sincerely before you perform. You will truly shine in so doing.

“Karylle and I have been friends for almost nine years now. We met during a fundraising event. Since then we have been constantly in touch even while I was abroad studying. We would text, chat, via Facebook and Viber.

“I consider Karylle as a spiritual friend. She considers me her ESP friend. I don’t actually know what that means. I guess it’s because that she would think of me, then I would suddenly come around for her. Karylle has a gift. She attracts what her mind conceives.

“We share a lot of things: Prayers, emotions, concern for family, charity events … just about anything.

“She is simple, down-to-earth and candid. Despite her celebrity status, sometimes she would pick me up at the airport or see me off. When Karylle and Yael started going out, we would hang out together, too. They are both cool. They both have lots of stories to share.

“One time while we were shopping, Yael did not go inside the store, while I accompanied Karylle. While he was waiting outside, Yael overheard some people talking about Karylle and me. They remarked: ’Yan pala ang daddy ni Karylle… Ang bata pa pala ng ex ni Zsa Zsa [Padilla].’”

Want proof? Palace to be given probe findings on PhilHealth corruption claims — Sotto