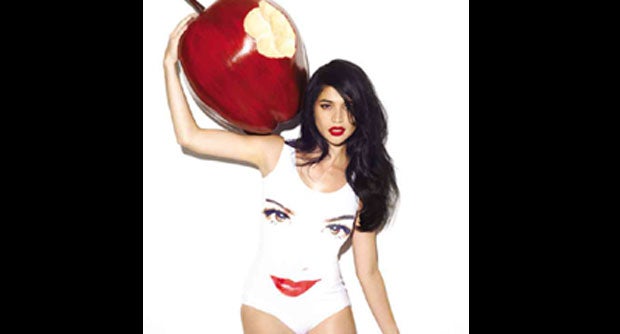 From alleged drunken bar outings to a nasty mishap with a box jellyfish that landed her in the hospital—Anne Curtis’ recent ordeals have been fodder for show biz websites and publications.

Next month, the actress-TV host is bound to hog the headlines again with her second solo concert at the Big Dome, “The Forbidden Concert Round 2: AnneKapal.” For this she has vowed to go “all-out.”

The 29-year-old meant she wouldn’t hold back on production numbers that involved harnesses, and that she would go as far as singing operatic and musical theater tunes. “I like classical music and watching theater productions such as ‘The Phantom of the Opera,’ ‘Wicked’ and ‘My Fair Lady,’” she told the Inquirer at a press con.

“Sometimes I sing numbers from those musicals out loud, and people around me say the songs suit my voice. “So I said, why don’t I?” Anne said, laughing.

Asked what the highlight of her show would be, Anne shot back: “Definitely not my voice!” She had always loved singing, but was now aware that singing didn’t love her back, she said.

“People obviously don’t go to my show for my singing; they go for the whole production—the stunts, costumes and all the pasabog, pahirapan ng buhay! (explosive and death-defying numbers)” Anne said, adding that doing concerts gives her the chance to just be herself, “fun and makulit (playful).”

She quipped, “But I’ve improved—a little! I can promise that I won’t be as out-of-tune as I was the first time.”

That said, Anne is taking up voice lessons, especially since all of her guests are what she calls “legit singers, pillars of the industry!” One of them, she said, asked her what she wanted to sing. “To which I replied, ‘Anything you want; I will adjust!’ It’s such an honor to have this person in my show.”

Show biz writers assumed it was Lea Salonga, who sang the theme of Anne’s ongoing  fantaserye, “Dyesebel.” Anne was quick to deny, “It’s not Ms. Lea. It’s going to be a surprise.”

Is her boyfriend, Erwan Heussaff, making an appearance? “Pinipilit ko siya pero ayaw (I was coercing him, but he did not want to),” Anne said. “He told me, ‘What is ours is ours.’ We’re open to the public, but we’re not overly show biz. We want to keep it that way.”

Anne is coproducing the concert with Viva. She admitted that there’s definitely pressure on her part for the show to do well. Her first concert, “Annebisyosa: No Other Concert,” was sold out, and was toured around the world.

“There’s a first time for everything. I’m at this age… I want to start doing different things; I also want to learn something business-related,” Anne said. “Luckily, Viva is supportive and willing to teach me. They encourage me to spread my wings.”

Aside from the concert, Anne is the sole producer of her sophomore studio album, “The Forbidden Album.” The new record will feature original songs, some of them composed by Marcus Davis, Billy Crawford, Kris Lawrence, Jay-R and Christian Bautista.

“My first single will be called ‘Made in the Philippines,’” she announced.

Anne is prepared for the inevitable slew of criticisms from pundits who believe that non-singers shouldn’t be doing shows or recording albums. “I’ve gone through the worst in terms of criticisms. I don’t let them [go to my head],” she said. “You can’t please everyone.”

She stressed: “I don’t want people to take me seriously. I just want them to have a great time and come out laughing.”

Produced by Viva Live and Annebisyosa Productions, “The Forbidden Concert Round 2: AnneKapal” is slated May 16 at the Smart Araneta Coliseum.