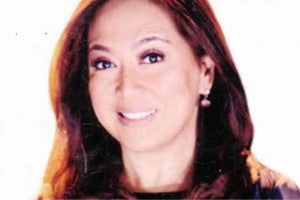 After diabetes dimmed my eyes, reading has become an effort. So, I’ve come home to radio.

Radio station dzFE plays  beautiful classical music, but the reception was so bad that I had to switch. My most interesting discovery was dzMM, and I hardly switch stations now because of the news that is so current and fast.

I start the day with “Kabayan” Noli de Castro. He reports the events of the week with humor and authority. —How can he wake up so early?

Then, there’s Ted Failon. The issues become dynamic, but Ted does it with fun, some anger and, again, humor. He doesn’t take himself seriously and yet he strikes hard at issues and wrongdoers.

If I have to leave the house, I try to catch the station on the car radio and listen to Anthony Taberna, Gerry Baja, and Jobert Sucaldito for some show biz tsismis.

The afternoon show of Ariel Ureta and Winnie Cordero is interesting. Ureta is laid-back, but full of interesting information—a good contrast to the style of Cordero, who shouts excitedly about getting her waistline back.

One sleepless Sunday at 2 a.m., it was a surprise to listen to a doctor talking about sex and orgasm, and teaching women that they should participate in the sex act and “not just lie there like lumber,” said in Tagalog to that effect. Her candid pronouncements woke me up! She is Dr. Lulu Marquez—and I enjoy her show very much.

Next time around, she was talking about vaginal repair. It seems she got a letter from a 52-year-old woman who complains that her husband does not enjoy sex with her after four children. So she wants that specific organ “repaired.” Marquez told her where to go and how much it would cost.

A lively teamup is that of Karen Davila and Vic de Leon Lima—they really tell it like it is. Lima teases Davila with controversial questions, and Karen dives in with answers that are fearless! Even in their interviews, they get close to “dangerous” grounds, leaving no doubt as to what they think. Ang tapang!

Korina Sanchez is more corporate and careful now that she’s married to Mar Roxas, who is a known presidential aspirant in 2016. No matter, I watch Korina on her TV shows, where she talks about exotic subjects.

Then, there’s Dr. Love aka Jun Banaag—a guru on love and relationships. He can be caring, listening to women and their problems, but I like it more when he gats angry with women who are dense!

One woman talked about her husband fooling around and spending her money. Dr. Love bluntly told her: “Gumising ka sa katotohanan!” I love the old songs he plays. He is religious, too, and goes on pilgrimages.

He is followed by Richard Enriquez, who also plays nostalgic tunes, including Frank Sinatra songs that bring back such memories—like, what were you doing in the back seat of a car when that song was No. 1?

—If you miss out on reading, listen to the radio!