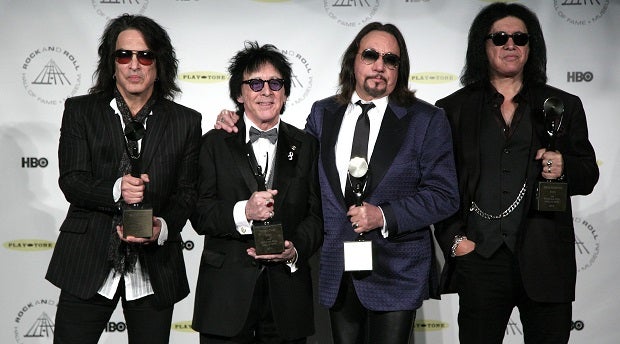 NEW YORK – Kiss, thumbing their noses at critics who disdained them, entered the Rock and Roll Hall of Fame on Thursday in a class that included Nirvana, Peter Gabriel, Hall & Oates and Bruce Springsteen’s E Street Band.

The original four members of Kiss didn’t perform at Brooklyn’s Barclays Center due to a dispute between active original members Gene Simmons and Paul Stanley and retired members Peter Criss and Ace Frehley. But the original four made peace and saluted each other in their induction speeches.

The theatrical quartet put on makeup, belched blood, shot fireworks out of Frehley’s guitar and sang about wanting to “Rock and Roll All Nite.” They weren’t trendy, but Rage Against the Machine’s Tom Morello said that Kiss inspired him and their concert was the first he attended.

He even fought high school bullies who ridiculed him for liking Kiss.

“Tonight proves beyond a shadow of a doubt that the high school bullies and critics were wrong,” he said. “Kiss fans were right.”

Stanley, to the cheers of the Barclays crowd, called for fans to be involved in the Rock Hall induction process.

Gabriel was inducted by Coldplay’s Chris Martin, who later sang with him on Gabriel’s “Washing of the Water.”

Martin said he turned to the Bible for inspiration in his speech, “the book of Genesis,” referring to the band with which Gabriel started and with which he was inducted into the Hall in 2010.

“An angel of the Lord descended and appeared to Phil the Collins,” Martin said, telling Genesis’ drummer that Gabriel was starting a solo career.

He credited Gabriel with creating a cathedral of sound and “he helped John Cusack get back his girlfriend in the movie ‘Say Anything.'”

That movie’s climactic moment featured Gabriel’s song “In Your Eyes,” and Gabriel performed a soaring version Thursday to celebrate his induction.

Gabriel said aspiring musicians should surround themselves with brilliance and, noting his early failures as a drummer, shouldn’t be afraid to try different things.

“Dream big, and let your imagination guide you,” Gabriel said. “Even if you end up dressing as a flower or a sexually transmitted disease.”

Cat Stevens, the 1970s era singer of “Morning Has Broken” and “Wild World,” was inducted by Art Garfunkel, who said his breakup with Paul Simon helped pave the way for Stevens’ entry into the charts.

“Thanks so much to my fans for believing,” said Stevens, who gave up music and converted to Islam, going by the name Yusuf. “I can still see some skeptical faces, but my fans believed.”

Nirvana is being inducted in its first year of eligibility. The trio’s “Smells Like Teen Spirit” hit like a thunderclap upon its 1991 release, briefly making the Pacific Northwest rock’s hottest scene before the band ended abruptly with singer Kurt Cobain’s suicide in 1994.

The Philadelphia-bred duo of Daryl Hall and John Oates is known for a string of blue-eyed soul hits including “Sara Smile,” ”Rich Girl,” ”Private Eyes” and “Maneater.” Another Philly musician, Questlove of the Roots, was to offer the induction speech.

Linda Ronstadt, the sexy siren of the Los Angeles rock scene in the 1970s, was not expected at her induction because her Parkinson’s disease makes travel difficult. Glenn Frey, who performed in her backup band with Don Henley before they formed the Eagles, was due to induct her.

Springsteen’s 1999 entrance into the Rock Hall without the E Street Band was a sore point for some of its members. Thursday they were to get their due in the sidemen category, although it will be a posthumous honor for saxman Clarence Clemons and keyboard player Danny Federici. Springsteen was set to perform with the band.

The 29th annual Rock and Roll Hall of Fame induction ceremony was being taped by HBO to air in May.

The first two artist managers were inducted into the Hall: the late Brian Epstein, of the Beatles, and Andrew Loog Oldham, of the Rolling Stones.