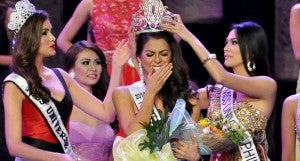 But due to a “very hectic schedule,” she had to skip her home village, Sibsib in the town of Tulunan.

A three-minute applause by an estimated 5,000 people in red shirts greeted Lastimosa, more known here as “MJ,” as she stepped out of the vehicle.

Her homecoming coincided with the “Sayaw Kutawato 2014,” a provincial ethno-modern group dance contest held at the provincial gymnasium in line with the 100th year foundation anniversary of the province on September 1.

Mendoza cited the positive impact of Lastimosa’s win on the local eco-tourism climate.

“We are so proud of you. You placed the province in the pedestal of the country’s eco-tourism chart,” Mendoza said in front of Lastimosa and the cheering crowd.

Calling Mendoza her “second mother,” Lastimosa repeatedly thanked the provincial governor for the support and prayers.

Lastimosa’s mother is still working in Saudi Arabia. Her aunt raised her in the village of Sibsib in Tulunan town where she started joining beauty contests.

She won the Miss Tulunan crown, then the Mutya ng North Cotabato and Miss Davao City, thus beauty contests were not new to the towering lady.

“Keep dreaming, keep fighting because sometimes we are down and sometimes we gain something good we can be proud of,” she told the crowd that gave her more applause and appreciation.

She also reminded future beauty contestants from North Cotabato not to give up in the face of setbacks and turn failure as a stepping stone in moving forward.

“Believe in yourself, that’s what I did,” she said in Filipino.

Lastimosa promised to return in September during the celebration of the province’s 100th foundation anniversary. Mendoza has officially named Lastimosa “ambassadress of North Cotabato globally.”