Courage or cowardice? Response to fear is a choice 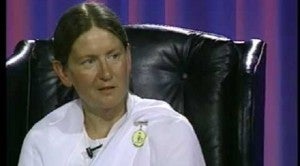 MANILA, Philippines—“Fear is crippling. Human beings fear violence and loss—of loved ones, personal property and reputation. Current world events continue to indicate that anything can happen to anyone, anytime, anywhere. Fear is a response to perceived danger. You have two choices: courage or cowardice.”

Sister Denise Lawrence, a visiting teacher of the Brahma Kumaris, had this message for the “Yolanda” survivors and “community rebuilders” in a lecture she delivered on Thursday at the University of the Philippines Tacloban and on Friday at the Leyte Normal University. She spoke on the subject, “When the Unexpected Happens.”

Lawrence said fear spiritually weakens anyone who has a lot of negative weight on their conscience. “They respond by acts of moral cowardice.” On the other hand, she said, “A person with a clear conscience will have developed the power of courage in the face of danger and hardship. Building that level of courage requires attention to the quality of every action.”

Over the weekend, Lawrence led disaster management groups on a silence retreat that revolved around “Caring for the Self,” at the Center for Spiritual Learning in Tagaytay City.

On Monday, April 7, the Canadian educator based in the BK main campus in Mount Abu, Rajasthan, India, will speak in a free public program on the subject, “Living Beyond Fear.”

As a Raja Yoga teacher for the Brahma Kumaris, she helped establish centers in Germany, Canada and the United States. From 1984 to 1996, she gave meditation courses to recovering narcotic addicts at several facilities of the Los Angeles prison system.

Ten books in values and spirituality that Lawrence authored have been translated into Hindi and are being used in distance learning courses offered in seven universities across India.

Since September 2010, Lawrence has divided her time between the BK main campus in Mount Abu and the international headquarters in London. She travels extensively to give lectures and conduct seminars, retreats and conferences on spiritual practice and yoga/meditation. (For a sampling of her work, log on to: http://bkdclasses.net.)

Is it possible to live beyond fear? Lawrence said, “In this hyper-speed age, we see an exponential number of self-created fears dominating people’s lives. We need to be reminded of our true worth and untapped strengths.”

Tapping the power of positive thinking

Instead of joining the fray, try a moment of silence