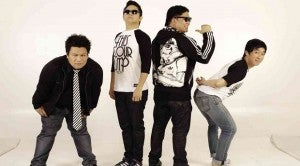 Some people see Jugs Jugueta’s hosting stint in the noontime variety program “It’s Showtime” as a distraction from his duties with the band Itchyworms. The guitarist-vocalist begs to disagree. Being part of the show, he believes, has done the pop-rock group a lot of good.

“We always come up with new music, but not everyone gets to hear them, especially not those in the provinces. Me being in the show improved our music’s exposure,” Jugs recently told the Inquirer. “I would say our fan base has doubled, even quadrupled.”

Known for melodic, pop-rock tunes such as “Beer,” “Akin Ka na Lang” and “Loveteam,” Itchyworms was formed back in 1996. Today it is composed of longtime friends Jugs, Chino Singson (guitar), Jazz Nicolas (vocals and drums) and Kelvin Yu (bass).

Jugs said he considered hosting his “day job,” adding that not a lot of musicians rely solely on playing gigs to support themselves.

“Wala namang yumayaman sa pagbabanda!” Jugs jested. “A lot of us artists have day jobs. Itchyworms, for me, is [the way to] enjoy myself as an artist. I am in this for my love of music, for creativity.”

His TV gig, Jugs pointed out, was likewise helpful in terms of promoting their new songs, especially now that the band is producing music independently. Itchyworms was under Sony Music Philippines until the label folded in 2012.

They produced their fourth and latest full-length album, “After All This Time,” with telecom company Talk ’N Text.

“It was our decision to go the independent route. We were happy with Sony, but it closed down. Now that we do things on our own, we get to call the shots,” Jugs said.

In fact, he revealed, the group is coming up with a repackaged version of “After All This Time,” which will feature remixes of the original tracks. “It’s something that probably wouldn’t happen as easily if we were under a label,” Jugs said.

While he acknowledged that it was harder to sell CDs without a big machinery backing up the band, Jugs said the setback did not deter them from creating new material.

“We have to accept that CDs don’t sell as well anywhere nowadays,” he said, adding that the band currently utilizes various social networking platforms to connect and share their music with the fans.

Jugs said some of the band’s work had been doing quite well on iTunes, with Filipino fans overseas comprising the majority of buyers. “But true to the trend these days, they buy more singles, not always the whole album,” he said.

Itchyworms is set to hold an album launch this month for the new edition of the space-themed “After All This Time.”

“The album tells the story of a fictional astronaut named June Galvez who gets stranded on the moon. From there, he witnesses a nuclear war on Earth. It’s kind of morbid!” Jugs said.

The single “Huwag na Sana Akong Gumising Mag-Isa” is lined up as the next release.

“Going on tour is like a vacation for us, plus we get to visit far-flung places and play our music for the locals,” Jugs related. “Playing out of town is like one big party for us. It’s our release; we can just get lost in the music.”