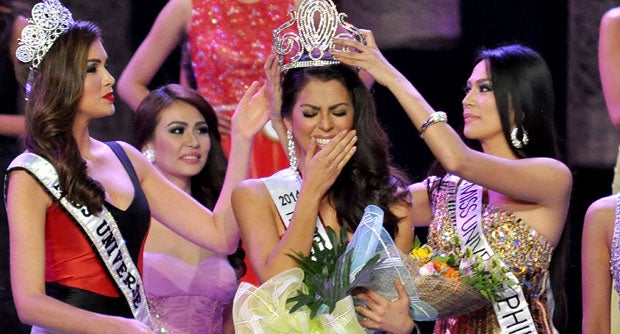 KIDAPAWAN CITY, North Cotabato, Philippines — “It pays to work hard and believe in yourself to achieve your goals.”

Mary Jean Lastimosa said this after she was crowned 2014 Binibining Pilipinas, her third attempt in the most coveted crown.

“If I wanted to reach your goals in life, you should work hard for it and believe in yourself because nothing is impossible,” the 26-year-old Lastimosa, more known as “MJ,” said in a radio interview here.

“This is what I have in mind most of the time, I never stopped believing that I can make it,” she added.

North Cotabato Gov. Emmylou Mendoza, who gave her all our support to MJ and was at the Araneta coliseum during the pageant night, said this year’s Bb. Pilipinas Universe gave honors to the province set to celebrate its 100th foundation anniversary this year.

“We are very proud of her. North Cotabato now is clearly in the tourism map with MJ’s victory,” Mendoza said, adding that she would be the province’s “special guest” during its 100th founding anniversary celebration on September 1.

Also, the local government of Tulunan is preparing a “very warm welcome to our very own MJ,” according to Tulunan Mayor Lanie Candolada.

She said MJ finished her elementary and secondary schools in Tulunan. She was born and raised in Barangay Sibsib.

Candolada said MJ and her crown represented the people of Tulunan and “she is our pride.”

“This clearly shows Tulunan is not about war and conflict, we have beautiful women and MJ is a classic example,” Candolada said, adding that the people of Tulunan, mostly Ilonggo, were celebrating on the streets as her victory was announced.

“Jubilation reverberated around town almost midnight last night, people were awake patiently waiting…kahit puyat happy naman (even if we were sleepy and lacking in sleep, we were happy),” Candolada said.

“This is very meaningful for us. Fitting because the honor came as we celebrate women’s month,” she added.