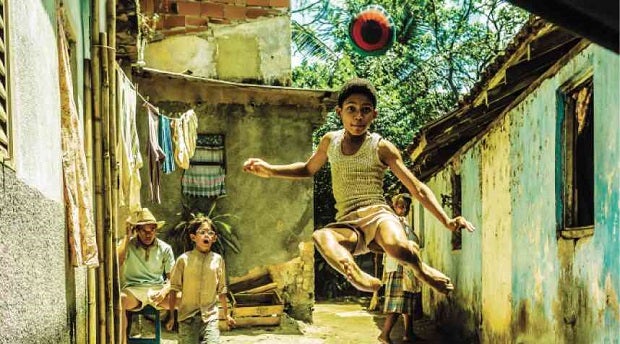 A SCENE from the coming “Pele,” Jeff and Michael Zimbalist’s film on the younger years of the soccer legend, which was lensed by Matthew Libatique, first Filipino to get a major Oscar nomination— in 2011, for “Black Swan.”

LOS ANGELES, United States—In this conclusion of my column on award-winning director of photography (DP), Matthew Libatique, I share his thoughts about his Filipino roots and lensing “Pele,” the film focusing on the Brazilian soccer legend’s younger years, from his boyhood to his first World Cup victory in 1958.

After shooting the epic “Noah” with frequent collaborator and friend, director Darren Aronofsky, in Iceland and New York, Matthew packed his bags and flew to Brazil to lens “Pele.” Working this time with the Zimbalist brothers (Michael and Jeff, whose directing credits include the Emmy-nominated “The Two Escobars”), the DP shot the biopic of Pele, who is portrayed by Kevin de Paula, a real-life Brazilian soccer player (Pele from ages 13 to 17) and Leonardo Lima Carvalho (Pele between ages 10 through 13).

On the contrast in working from “Noah” to “Pele,” Matthew said, “I’ve always gone from one project to another that are very different.  You just change your mind set.  This was a big jump but every film has logistical challenges and [‘Noah’] had its own. ‘Pele’ was no picnic, either.  Every film is hard. But it was a jump in the sense that it was the first time I had worked with these directors.”

He continued: “I’ve worked three times each with Jon Favreau, Joel Schumacher and Spike Lee. When I jump into a film with them, a large part of the preproduction process gets eliminated because I know them. I understand their language and how they go about making films. So the biggest [challenge], really, is working with somebody new.” 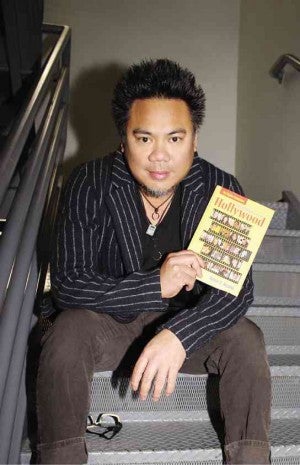 MATTHEW Libatique with a copy of the columnist’s book, “My Filipino Connection: The Philippines in Hollywood.” Photo by Ruben V. Nepales

He pointed out that it was his third time to collaborate with two directors. “The first was with Deborah Kaplan and Harry Elfont on ‘Josie and the Pussycats’ and the second was with Jonathan Dayton and Valerie Faris on ‘Ruby Sparks.’  It’s definitely different [from] working with one but they’re extremely intelligent guys with a point of view and strong aesthetic. That’s what you want as a cinematographer.”

Asked if he felt like he was in the Philippines while shooting in Rio de Janeiro, Matthew said, smiling, “Sometimes…you walked outside and it just smelled like the Philippines. It just had that quality. I can’t say enough about the people of Brazil. Just in the film community, there is incredible talent. It’s very casual and easygoing [in Brazil]. When you’re coming with a bunch of Americans into [that] atmosphere and try to make a film, there’s a bit of a culture conflict.”

“My parents migrated from the Philippines in the late 1960s so it’s incumbent upon me, so that my children will know where they came from…We still have family there that my mother (Georgina) still talks to. And because of Facebook and Twitter, the conversations that I’m having with more Filipinos in the Philippines have become greater than it was, say, 10 years ago. I speak with filmmakers and cinematographers in the Philippines.”

Matthew stressed that he has always been proud of his Pinoy heritage. And he’s glad that he’s seeing more talents of Filipino background in the industry. “I’ve been in this business for over 20 years; I’ve been meeting more of them [lately].  At the start, I didn’t meet anyone.  I have a cousin a year older than I, who’s a visual effects supervisor in New York.  He was the only [Filipino] I knew [in the industry then]. Now, I meet up-and-coming cameramen who are Filipino-Americans or Filipinos. It’s great. It’s nice to get to culturally connect.”

Laughing, he recalled one of our first meetings: “We probably talked about food.  It’s almost always the first thing [Filipinos] talk about. But I remember the Oscar (campaign) season for ‘Black Swan.’ I met so many people—(designer) Oliver Tolentino, (publicist and Fil-Am community leader) Winston Emano and others, too.

“I was lucky to get a call while we were making ‘Noah’—an invite to the state department in Washington, DC, because President Aquino was going there for a banquet that Hillary Clinton was hosting. I said, ‘What, me?’ I took the train and went down there. I met even more Filipino-Americans— singers, gymnasts…you name it.”

“Biopics are biopics. Then, there are the social and historical aspects with regard to Filipinos that may or may not be interesting to a general audience. That’s the hard reality and we should accept that as Filipino-Americans.  That may not be accepted by a larger [audience] and so [that movie] may not make money.  I’m not even saying ‘Cesar Chavez’ may not make that much money but I hope it does well because any film with a social viewpoint…trying to speak to and for a minority, deserves attention, deserves to be made. But the expectations have to be tempered. In this day and age, when people are making money with financial resources from wherever, I agree, somebody should make that film.  Who’s going to pay for it?  I have no idea.”

I asked about a reported project he’s making with Filipino director Raya Martin. “Raya has a lot of projects going on,” he said. “Raya is an enigma of cinema. I’m so happy to know him. Someday, we will make a film [together].” But right now, nothing’s set in stone.”

“What’s next for you?” I asked as the interview drew to a close. “That’s a good question,” he replied with a smile.  “I don’t know.” But is he shooting commercials (he lenses spots for top brands in between films)? “That’s what I’m doing now, yeah.  That’s it.”