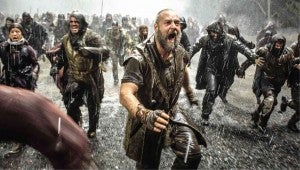 LOS ANGELES—In his first collaboration with director Darren Aronofsky since their acclaimed worldwide hit “Black Swan,” Oscar-nominated Fil-Am cinematographer Matthew Libatique is winning praises in early reviews of the epic “Noah.” “Compelling” and “astounding” are among the adjectives used to hail Matthew’s cinematography that lives up to the epic scope of Darren’s take on the biblical story.

Sporting his trademark spiky hair, the New York-born Matthew, boyish-looking at 45, sat down for an early morning talk with me at the Four Seasons Hotel. I gave him a copy of my book, “My Filipino Connection: The Philippines in Hollywood,” where he is one of my featured subjects. Matthew’s late father, Justiniano, came from my province, Pangasinan; his mother, Georgina, from Quezon, lives in California.

Is “Noah” the most difficult film you’ve shot?

It’s hard to say. “The Fountain” was, in its way, a very difficult film to make, not just in terms of my particular work but how hard it was for Darren to make because that [movie], in many ways, was an even closer story to him…

But, logistically, this film is up there. I don’t know if it’s the hardest film I ever had to make but it’s… up there. If this film were made by somebody else and with the same amount of 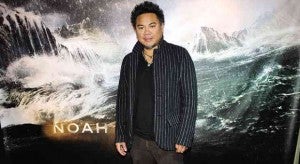 OSCAR nominee Matthew Libatique’s first concern was, “How are we going to deal with the water?” Photo by Ruben V. Nepales

money, maybe it wouldn’t be as difficult. Darren is demanding as a director, and he should be. He’s uncompromising; he likes to put everything, all the money, on the screen.

How much of a contrast was shooting this film and working with Darren on “Black Swan”?

It’s not that different, really. Working with Darren is the same whether we’re making a $5 million or $130 million movie. Maybe he’s become a little more fluid. He’s gotten older, more comfortable in his directorial style.

This is your fifth collaboration with Darren, who’s also your friend. Did the demands and challenges of making this film test your friendship in any way?

Not much has changed between us. We took a break from working together on “The Wrestler” (Darren worked with DP Maryse Alberti), but we met up afterward [as] friends. He asked me to do “Black Swan.” From “Black Swan” until now, it’s been a different relationship than it was because [we’re getting] older. We’ve become more comfortable. We’re trying to stay within the story,  within the confines that we created. As visual storytellers, we check our egos at the door.

Many critics have been praising the seamless blending of your live-action shots with the CGI elements in “Noah.” 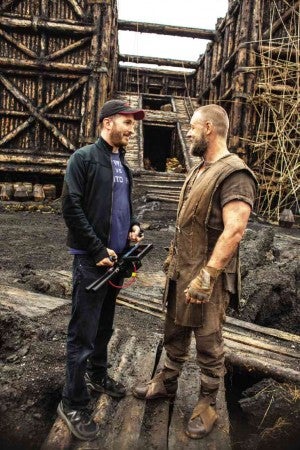 What I attribute that to, from a technical level, is we didn’t have a lot of green screens. ILM (Industrial Light & Magic) is masterful at some of the things. They’ve revolutionized so much with regards to movement of creatures. Their artists and compositors are exceptional. They incorporated their work into the photography.

Consequently, in post-production, we were able to meld those things together in the color timing. There are always some challenges at that level. They provided work that was integrated into the photography. [Thanks to] ILM and its philosophy, we were allowed to be free in the photography because of the lack of green or blue screens. Any time we’re dealing with effects, [like] in the first two “Iron Man” movies and then in the “Cowboys & Aliens” film, it’s really a close collaboration between the preproduction and visual effects.

We had the shell of the exterior. It was an impressive structure, a piece of art—a giant sculpture of an ark.  It was so large in scale, that it was treacherous to navigate the ramp that led the animals inside the ark and then shoot the battle scene, right before the deluge. It was a challenge in terms of safety and getting the camera and equipment on that ramp.

As for the interior, the biggest challenge was lighting. It was a magnificent three-story structure built inside an armory, a massive undertaking. It was just a beautiful thing to see, probably the most incredible set I’ve ever been a part of.

Some scenes were simple yet so striking, that visual effects were barely needed. Russell and Jennifer’s conversing, silhouetted figures were some of the most beautiful images we’ve ever seen.

We didn’t know how beautiful it was going to be. This is not a lie—we shot it at 2 in the morning…  I wish the whole thing was just in silhouette but it was so stunning. I don’t think we’ve been so blown away before. We were sitting there at 2 a.m. and the sun was actually coming up. It’s on its way up from the sunrise. It would stay beneath the horizon only for an hour and then come back up, so it was just incredible. We shot that whole scene as is.

Obviously, they put some stars into the background. But that’s the color of the sky at 2  a.m. in June in Iceland, right outside of Reykjavik. It was incredible.

When I read that sequence, I was excited… Ari (Handel) and Darren wrote a very beautiful piece. The funny thing is, when we shot Russell delivering that, on his close-up we could have just stayed there the entire time and he held that close-up for that entirety of the soliloquy.

But the whole intention was to do the sequence, and Darren had something in mind that was very specific and he didn’t deviate.

This film marks your first time to work with Russell Crowe.

The first time you point a camera at him, you realize why he’s a movie star. Just the voice, you would know exactly who it was. He’s incredible. He epitomizes the character, not only in a very masculine way.  He has this quality—he’s sympathetic.

When Darren talked to me about casting Russell, I knew there was going to be those moments where he was going to give us that subtle, sympathetic quality that only a handful of people have. He’s such a fine actor.

It was also your first time to work with Emma Watson. 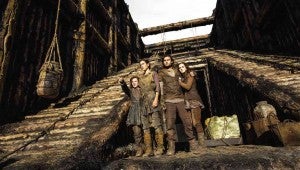 Emma is delightful, absolutely beautiful—a delight, a pleasure. She’s very smart and extremely curious, but focused on her character. At the same time, she possesses the personality of a veteran because she’s been on set for so long, that it’s not new to her. I had no technical problems with any actors in the entire cast. “Noah” has a beautiful “family.”

What was your experience like, filming the exterior scenes in Iceland?

It was almost like I was a baseball player thrown an underhand pitch when it comes to those exteriors in Iceland. The only thing you’re dealing with is an island, so you’re dealing with constant weather change. But in terms of the vistas, they are incredible.  It’s one of the top three most beautiful places I’ve ever seen.

Were you on board this project from the beginning?

I think it was after either “The Fountain” or “Black Swan” that Darren mentioned it to me. My first thought was, how are we going to deal with the water?

But all the tidal wave movies came out. Clint Eastwood’s “Hereafter” had the big tsunami. As soon as that film came out, I knew that “Noah” could be made. That’s when I stopped worrying, except for  whether or not somebody was going to give Darren the money to make the film.