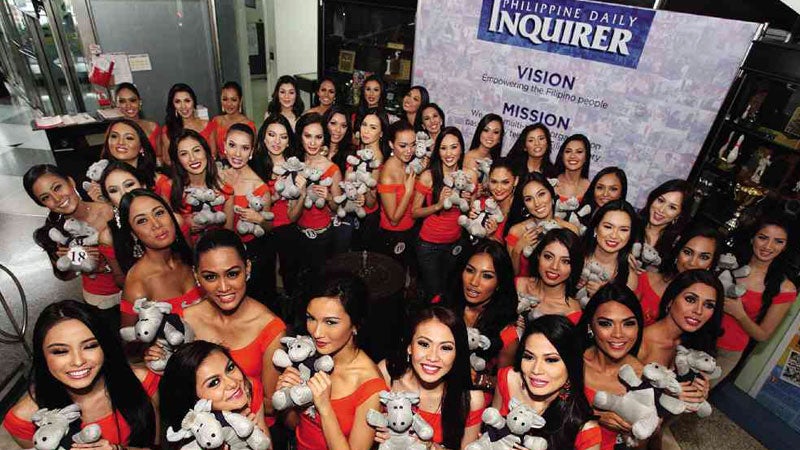 BINIBINING Pilipinas 2014 aspirants, among them former finalists, on a recent visit to the Inquirer. KIMBERLY DE LA CRUZ

Unfazed by the pressure of topping the Philippines’ impressive performance in international pageants last year, these ladies are staging a comeback to the Binibining Pilipinas stage for another shot to represent the country.

Pia Alonzo Wurtzbach, last year’s lone runnerup, hopes to duplicate what Janine Tugonon and Dianne Necio achieved in the past. Like her predecessors, the German-Filipino stunner rescinded her runnerup spot to rejoin the national competition this year.

Necio, who was first runnerup in 2010, immediately joined in 2011, something unprecedented at that time. She landed the Binibining Pilipinas-International title and represented the Philippines in the Miss International pageant in Japan where she cracked the semifinals by being chosen as Miss Internet.

Tugonon also made a quick comeback, and successfully stepped up from being first runnerup to Miss Universe Philippines. She later placed second to the United States’ Olivia Culpo in the 2012 Miss Universe tilt in Las Vegas.

“I want to be Miss Universe,” Wurtzbach told the Philippine Daily Inquirer during the candidates’ recent visit at the newspaper’s office in Makati City. She said she is more than ready for the big leagues.

“When you’re first runnerup to four international winners, you have to be ready. Last year was a full year of training. I was the ‘spare tire.’ I was the only runnerup,” expounded the 25-year-old actress who hails from Cagayan de Oro City.

Another aspirant who hopes to follow in the footsteps of a former Binibining Pilipinas winner is Mary Jean Lastimosa, second runnerup in 2011. In 2012 she was a semifinalist and recipient of the Bb. Avon and Bb. Philippine Airlines awards.

“I had a year’s rest from pageants. Last year, I just traveled and missed pageants a lot. This is another chance to showcase myself,” Lastimosa told the Inquirer.

Another three-time aspirant is Diana Arevalo, 25, from Oriental Mindoro.

The two-time semifinalist related: “In 2009, I came straight from the province. I didn’t know a thing about national pageants. I was awestruck and overwhelmed. In 2011, the stress and tension slowed me down.”

Parul Shah and Ellore Noelle Punzalan, 2013 semifinalists, are also in the lineup, along with former aspirants Ladylyn Riva and Hanna Ruth Sison.

The fates of these ladies will be determined at the 2014 Binibining Pilipinas coronation night on March 30, 7 p.m., at the Smart Araneta Coliseum.

Reigning Miss Universe Maria Gabriela Isler from Venezuela will be one of the judges.

The ceremonies will be seen on the same evening on ABS-CBN.