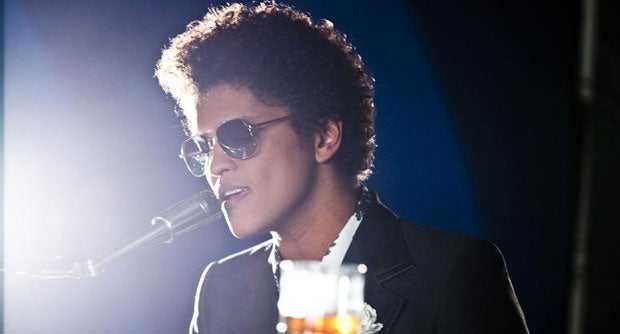 The 28-year-old Grammy-winning singer-songwriter, along with his band and crew, is billeted in Solaire Resort and Casino, a short distance from the MOA Arena.

Mars, born Peter Gene Hernandez in Honolulu, grew up in a family of musicians led by his father, Peter Hernandez, a Puerto Rican from Brooklyn, New York. His mother, Bernadette “Bernie” San Pedro Bayot, was born in Manila.

In a past interview with Inquirer Lifestyle, published only last March 12, Bayot, who was very close with her son, was quoted by writer Tatin Yang: “I knew he was special the day he was born.”

The same article mentioned: “In June last year, Bernie unexpectedly died of a brain aneurysm; she was only 55. When Bruno received another Grammy for Best Pop Vocal Album for “Unorthodox Jukebox” two months ago, he dedicated his win to his mom: Ma, I know you’re watching, I hope you’re smiling, I love you.”

Bruno Mars returns to Manila for his ‘Moonshine Jungle Tour’