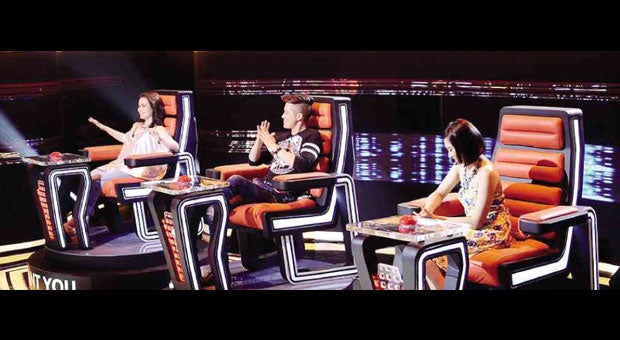 That’s how I described my first day back on “The Voice of the Philippines.” This time, we were not auditioning adults; we were auditioning children.

The age range of young artists singing behind us (when the chairs are facing away from the stage) was 8 to 14 years. They represented all walks of life, different genres of music, and various vocal types. At this writing, it’s Monday night and we just finished our very first day.

It was quite exciting, despite it being so early in this Blind Audition process. We had the biriteras (staples in singing contests), but we also had male belters, bossa girls, singers that floated (rather than muscled) their way through songs. There are kids who accompanied themselves on guitar, too.

We have three days left to complete; you’ll get a blow-by-blow once Blind Auditions are done, and all our teams have been assembled. Each of the coaches will end up with a team of— when all is said and done— 18 members. The elimination process will be quite brutal, in that large numbers of kids will get sent home at once at Battles and the Sing-Off. I’ll be honest; I won’t be looking forward to those days.

On the first day, all three coaches— Bamboo, Sarah Geronimo, and myself— noticed that there was a fair amount of “over-singing” going on. For a while, singer after singer sounded like they were using a fair amount of force to hit those high notes, whether or not it was appropriate. It’s one thing to hit a high note; it’s quite another to shout one. My only hope is that we were able to explain the difference between the two.

We also noticed kids performing songs whose lyrics were a bit too mature for their age. Okay, fine, of course each artist would pick the song with enough of those money notes to get them, hopefully, to the next stage of the competition.

However, when a child sings about a love that only a grown-up would understand, it can be a tad disconcerting. One such artist sang a song that he knew absolutely nothing about, given his life experience. We suggested another title from the same genre that was within the realm of comprehension for this little one.

Prior to the actual start of the taping, the coaches and the whole production staff underwent a session with child psychologists Pura, Pau, and Marlo, to give us all insight into how to go about critiquing these young, sensitive humans if the chairs don’t turn for them. We spoke about boundaries (these kids aren’t our children, after all; we can’t treat them as such). We also talked about honesty, being very specific, speaking in a way the children would be able to understand (talk to an 8-year-old using words in their vocabulary), and instinct and intuition when something goes amiss. We’ve so far had a few kids cry, which does trigger something in each of us. However, maintaining objectivity is key, in the same way it was important for Season One.

I’m now almost at home after a long day… I’ll need to get a good night’s sleep to face the next day ahead. It’s exciting for sure! Coaching a young, talented singer is something that I am looking forward to.

I’ve really enjoyed the shinkansen, heading from Tokyo to Osaka to Nagoya to Kanazawa, watching the scenery change and, once, the weather; going from a metropolis to a small town, with snow-capped mountains in the distance, and the occasional gigantic golden Buddha.

On the journey, we had the opportunity to sample some of the freshest, most amazing sushi available anywhere— succulent tuna belly, flavorful sea urchin, the most amazing crab legs, to name just a few. (If anyone is heading to Kanazawa anytime soon, go to Aoi Sushi. You will not be disappointed). Il Divo’s David Miller, my cohort Sheilla Habab and I had to make a return trip after the show, just because it was so delicious.

My husband Rob (who joined me in our last few days in Tokyo), Sheilla, and I headed to hazy Kuala Lumpur ahead of the rest of the group (the boys had a show in Taiwan while I had a day off). We headed to the home of good friends Bruce and Rahmah Umemoto (Bruce and Rob have been friends for over 30 years) to spend the night eating lots of yummy Malaysian food. My one request for the following day’s breakfast, nasi lemak, was fulfilled. I was one happy girl.

The next day was spent getting massages, mani-pedis, and merienda before the hour-long ride up to Genting, where the air quality was cleaner. However, heading up there meant we’d be singing at high altitude. It left me wanting for a larger storehouse of precious air, as I found I couldn’t hold my notes as long as I normally could. I kept reminding myself to take many deep breaths. In this thin air, this would prove a handy skill. There were oxygen tanks on standby, in case any of us required one. (To everyone at Resorts World Genting, you have all been amazing. Thanks to the audiences who came to the Arena of the Stars last weekend!)

Speaking of Il Divo: To everyone who watched “A Musical Affair” last night at the Newport Performing Arts Theater in Resorts World Manila, thank you so much!

TAGS: “The Voice of the Philippines”, Bamboo, Sarah Geronimo