Ricky Gervais’ past as a one-hit pop wonder in Manila 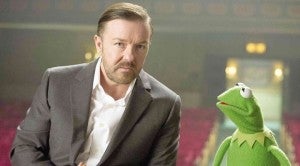 THE BRITISH comedian, who stars in “Muppets Most Wanted,” says he’d like to perform in Vegas with Constantine, Kermit the Frog’s evil alter ego.

LOS ANGELES – We got Ricky Gervais to talk, in our recent interview, about Tina Fey and Amy Poehler, who succeeded him as Golden Globe hosts. But first, we had to tease him again about being a one-hit pop wonder in the early 1980s in the Philippines. Ricky was half of the pop duo named Seona Dancing, which released two singles, including “More to Lose,” that clicked only in Manila. He also cowrote the songs.

“I’ve heard that for 30 years,” said Ricky, laughing. Dressed casually in a V-neck tee and jeans, the British wit, occasionally rocking in his chair, was in a especially good mood this afternoon at the Beverly Hilton Hotel. “Yeah, in one country, I was a big (pop) star. Yay! It was over so quickly.”

Ricky explained how he became a singer in that era of Wham! and George Michael. “Everyone I knew was in a band. I think I was 20. We put a couple of singles out. They failed; that was the end of it. Now that I am famous in a different field, people always find that picture of me looking thin and young. It’s terrible, isn’t it? (Laughs) I had a jaw and lovely, thick hair.” 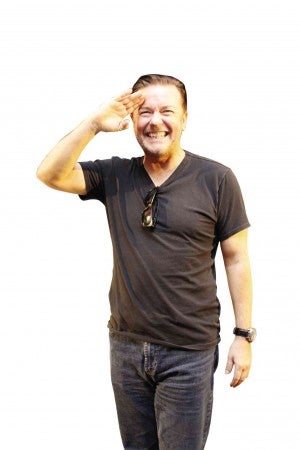 DRESSED casually for this interview, the British wit was in a jolly mood. Photo by Ruben V. Nepales

Indeed, it’s hard to believe that the slender, androgynous man in those photos is Ricky.

The actor-writer, who created and starred (he played David Brent) in the original BBC production of the comedy series “The Office,” pointed out: “I am living the pretend dream, through David Brent. That’s even more fun. I think rock is quite tongue-in-cheek, anyway. I am almost glad [being a pop star] didn’t quite work out. If I was a rock star when I was 20, I would be dead now.”

Asked if he considers his decision to become a singer one of the biggest mistakes in his career, Ricky countered, “No, it’s every kid’s dream. My mistake was that I wanted to be a pop star. I should have wanted to be a musician. I never made that mistake again.”

On what he was like as a pop music figure, Ricky was more than candid: “I was unbearable. I could never turn off. I always wanted to be funnier than the next guy. I was a f***ing nightmare. Then I got fat; that was the best thing that ever happened to me.”

Complimented that he has lost weight, Ricky cracked, “But that’s for health reasons. I am still a fat guy inside.”

Now, for his opinion on Tina Fey, with whom he costars in Disney’s “Muppets Most Wanted,” a caper movie directed by James Bobin: “She and Amy were absolutely brilliant,” Ricky said. “I liked their work on ‘Saturday Night Live’ as well.”

He refused to compare his humor to that of the two women, saying, “Everyone is different. I have never been part of the competition because I do my own thing. I have never worried about what others are doing. I am a fan of a lot of comedians who are nothing like me. 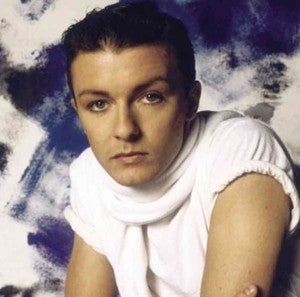 AS A POP singer in the 1980s, Gervais describes himself as a “nightmare.”

On his own stint as a Golden Globe host, he said, “I absolutely loved those three years, enjoyed the last one the most. The first time, I was a bit nervous; the second time, I think the audience was a bit nervous. I think the audience enjoyed the third one the most; the audience understood that I was just having fun, that I wasn’t trying to hurt anyone’s feelings. I had to decide:  Do I pander to these 200 millionaires in the room or to the 200 million people watching at home? I was very clear about that.”

He continued: “My biggest influence is probably Laurel and Hardy. Two idiots. I like their relationship; they go at the heart and they were together. That’s also one of the things I like about The Muppets— the optimism. I like people who fall over but get themselves back up and dust themselves off.”

In “Muppets Most Wanted,” Ricky plays Dominic Badguy, number two to Constantine, the world’s number one criminal who is a dead ringer for Kermit the Frog.

On the relationship of Kermit and that lovable, glamorous Miss Piggy, Ricky commented, “I love that relationship; it’s like she plays this huge diva who loves Kermit and wants to marry him. Kermit is scared of her (laughs). He’s really sweet. I like the fact that both in personality and physically, she is so much bigger— he’s this little amphibian that would be crushed by this pig.”

As for his own real-life romance, Ricky paraphrased the lyrics of an amusing duet he croons with Constantine, “I’m Number One,” “My girlfriend Jane (Fallon) is number one and I am number two.”

How did Jane, a producer and screenwriter, his partner for 31 years now, make a difference in his life? “From things like finding your soul mate so you are never alone, to celebrating my birthday which I never did before I met Jane—the answer is, in every aspect.”

(Email the columnist at [email protected] Follow him at http://twitter.com/nepalesruben).

Read Next
Even more grueling test of endurance
EDITORS' PICK
SMDC all set for growth, prepared to face market resurgence
Dengue cases in PH continue to swell: 92,343 as of July 23
House energy committee chair Arroyo bats for cheap electricity
‘Revolting’: 29,000 teachers left out after PS-DBM bought pricey, outdated laptops
TNT brings Sarah G and Mimiyuuuh together for epic collab
Imee Marcos tests positive for COVID-19
MOST READ
Raffy Tulfo blasts ‘killjoy’ critics of Angara’s birthday party: It’s for charity
Bongbong Marcos to PNP: Use of force must be reasonable, justifiable and only when necessary
Homeowners of BF Homes in Parañaque protest opening of 5 gates to public
‘Revolting’: 29,000 teachers left out after PS-DBM bought pricey, outdated laptops
Don't miss out on the latest news and information.