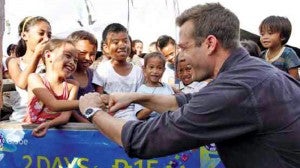 “Prior to this show, I wore suits only to funerals and weddings,” said “Suits” actor Gabriel Macht during his Manila visit last weekend. “Now, I try and wear suits for interviews, too,” he told the Inquirer. “[Otherwise] my personal style is basically board shorts, jeans, T-shirts and combat boots!”

The actor led the ceremonial rebuilding of small stores, and was shown around recovering communities by Leyte Rep. Lucy Torres-Gomez.

Macht, 42, first appeared onscreen in the film “Why Would I Lie?” at age 8. In the 1990s, he had one-episode roles in “Beverly Hills, 90210” and “Sex and the City.” He had some prominent film projects in recent years; he portrayed the titular masked crime fighter in 2008’s “The Spirit,” and UN security agent Robert Pryce in 2009’s “Whiteout.”

Excerpts from the Inquirer Entertainment’s one-on-one:

How affecting for you was the visit to Ormoc, and how did the people respond?

It was an incredible experience, very inspiring. I’m humbled that I was able to [help]. We put a sign up for a woman who owns a sari-sari store. Just to see the people smiling and excited, that was very [rewarding] for me. Just going to the sugarcane fields… I feel that rebuilding is in full [swing]. People [will soon] get back on their feet.

Harvey Specter is the character you’ve played the longest; how does periodically returning to it feel? 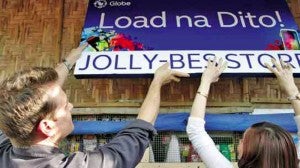 It’s great. The writing is still solid. We’re going into new areas of his life. In these back six episodes, we deal with Harvey getting into a romantic relationship with Scottie (Abigail Spencer). We’ve seen that he’s sort of a commitment-phobe and it’ll be interesting to see him being her boss as well.

You’ve acted since the 1980s. How has the industry changed?

When I started out as a kid, I was under the impression that wherever you start, it’s where you’re gonna finish—if you’re a film actor, you [stay one]. Now, there’ so much crossover; you can do a bunch of films, then a TV series, then go back to film…

And now, with social media, it doesn’t matter where people get their content. Some find it excellent to watch a show on their phones. It’s exciting to see where all these will lead to.

What projects interest you between seasons of “Suits”?

I work seven months a year… commuting every weekend to see my family. When I’m on a hiatus, I feel that’s really my time to spend with them.

What is the significance of “Suits” now?

It’s super-accessible; it’s one of the most-pirated, most downloaded shows in the whole world! What can I say? It’s a joy to be part of a show that is really connected with audiences all over the world.

Would directing an episode interest you?

I am going to direct an episode in Season 4; I’m looking forward to that.

How would you describe your relationship with Patrick J. Adams?

We’re having a great time! Before we started working, we made a commitment to each other that we wouldn’t create a diva-like/big-ego environment. I think that has splintered out to the other [actors]. When you’re working with an ensemble, you become a family, in a way.

Are you comfortable now with lawyer lingo?

Yeah! I’m learning eight to 10 pages a day. The legalese is difficult but there’s a learning curve and it’s getting more natural as we move forward!