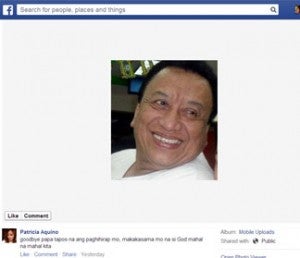 MANILA, Philippines—Veteran character actor Roldan Aquino passed away Tuesday (March 10) at 9:30 in the morning, according to children, Viva and Patricia.

He suffered a stroke last January, Viva recalled. Reports said Aquino underwent an operation on January 20, 2014 after suffering a stroke.

He last appeared in the TV show “Wagas” and movie “The Fighting Chefs” last year.

Viva said that the family has yet to finalize funeral details. “We are waiting for my half-brothers Jordan and Justin who are in the United States.”

Aquino is survived by Viva and his siblings Patricia, Priscilla and Roy and their mother Rachel and six other children. With a report from Nestor Corrales, INQUIRER.net