Leto speaks on Ukraine, Venezuela as he wins Oscar 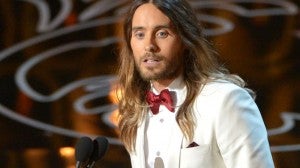 Jared Leto accepts the award for best actor in a supporting role for “Dallas Buyers Club” during the Oscars at the Dolby Theatre on Sunday, March 2, 2014, in Los Angeles. AP

HOLLYWOOD – Jared Leto on Sunday paid tribute to the people of crisis-hit Ukraine and anti-government demonstrators in Venezuela as he won the best supporting actor Oscar for his work in “Dallas Buyers Club.”

Leto won for his heart-wrenching portrayal of a transgender woman infected with AIDS, a stunning comeback role for the 42-year-old, who had spent years away from acting, focusing on his music career.

After thanking his mother – a high school dropout and single mom – “for teaching me to dream,” Leto turned to a wide range of political topics, including the unrest in two of the world’s current trouble spots.

“To all of the dreamers out there around the world watching this tonight, in places like Ukraine and Venezuela, I want to say, we are here,” Leto told the Academy Awards crowd as he clutched his golden statuette.

“And as you struggle to make your dreams happen, to live the impossible, we’re thinking of you tonight.”

Leto also addressed several long-term societal issues that have simmered for years in the United States and elsewhere.

“For the 36 million people who have lost the battle to AIDS, and to those of you out there who have ever felt injustice because of who you are or who you love, tonight I stand here in front of the world with you and for you,” he said.

Leto had been criticized earlier in the film awards season for not mentioning the global battle against HIV and AIDS.

Read Next
‘Frozen’ wins Oscar for best animated feature film
EDITORS' PICK
‘Panic buying’ of vaccine feared may lead to oversupply, wastage
No sea row compromises in Sino vaccine talksː Galvez
New Year, New Rediscoveries
Is your company a growth champion? Stand up and be recognized!
Acer Philippines welcomes you to its first flagship store
16 new COVID-19 patients confirmed to be UK variant carriers — DOH
MOST READ
Ate Vi’s message to those against ABS-CBN’s franchise renewal
Of victims and saviors: Sex work amid the pandemic
OVP spokesman tells Mocha Uson: Don’t drag us into your nonsense
UST students protest dismissal of Grade 12 student
Don't miss out on the latest news and information.