Will it rain on the Oscar parade? | Inquirer Entertainment
Close
menu
search

Will it rain on the Oscar parade? 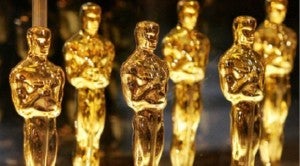 HOLLYWOOD, California – Hollywood is ready for its closeup as stars gather (Monday morning, Manila time) for the most fiercely contested Oscars show in decades, but organizers hope the weather doesn’t rain on their glamorous red-carpet parade.

Forecasters predict Los Angeles could have its biggest storm in two years.

Aside from the weather, the Best Picture race is just as suspenseful. The night’s biggest prize will be handed out at the end of the 86th Academy Awards ceremony hosted by comic Ellen DeGeneres.

“There’s going to be genuine suspense this year when that final envelope is opened,” awards consultant Tony Angellotti told the Los Angeles Times.

The 6,100 voting members of the Academy of Motion Picture Arts and Sciences cast their ballots over 12 days starting on Valentine’s Day and ending on Tuesday.

But the Best Picture race is so close that the winner can come down to only a few votes, under the Academy’s preferential voting system.

Under the rules, voters were to rank all nine nominated films.

Those with the least first-place votes are dropped, and their votes given to the next highest-ranked nominees. This continues until one movie has 50 percent plus one vote.

The show will be preceded by the usual fashion extravaganza on the red carpet, as Tinseltown’s finest parade along Hollywood Boulevard and into the Dolby Theater.

Organizers hastily rescheduled the carpet roll-out to avoid forecast rain earlier in the week and reviewed some camera positions.

The storm clouds come as a relief to many locals, as California has been suffering its worst drought for a century, threatening farmers and cattle ranchers.

But for organizers of Tinseltown’s biggest night, it is most certainly one headache they could do without. AFP