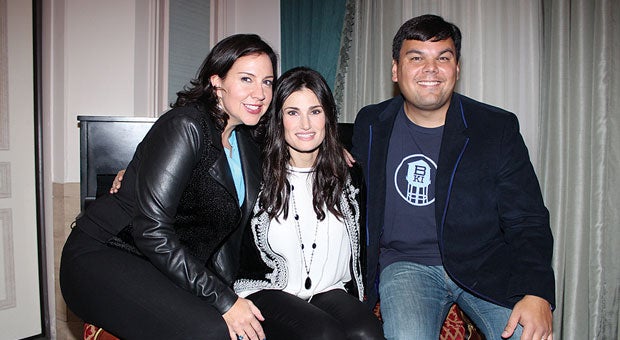 LOS ANGELES—Robert Lopez, the Filipino-American cocomposer of “Let It Go,” the Oscar Best Song nominee from “Frozen” which has inspired numerous tributes and parodies online, said that win or lose on Sunday (Monday morning, Manila time) at the Academy Awards, he hopes he will have inspired Filipino artists everywhere. He stands a chance of being the first Filipino-American to win an Oscar and to join an elite circle of people who have won what is known as “EGOT”: Emmy, Grammy, Oscar and Tony.

Robert, whose father was part-Filipino (his grandpa was pure Filipino; his grandma, Filipino and Scottish-American), has clinched two Daytime Emmys for his music direction and composition in “The Wonder Pets,” a musical theater album Grammy for “The Book of Mormon: Original Broadway Cast Recording” and two original score Tonys for “Avenue Q” and “The Book of Mormon.”

He is jovial and cheerful—qualities that he shares with his wife and collaborator, Kristen Anderson-Lopez, with whom he has two young daughters. In our first interview in New York, where they live, the boyish-looking Robert played the piano several times while Kristen, who has a beautiful voice (she’s also an actress), sang. On the red carpet in last January’s Golden Globe Awards, where their “Let It Go” was also up for the Best Song award, they were a gregarious tandem—she in a bright red gown, he in a tux.

Excerpts from our most recent e-mail interview with Robert:

Previous Filipino-American nominees for Academy Awards include actress Hailee Steinfeld (“True Grit”) and cinematographer Matthew Libatique (“Black Swan”). Your thoughts on the possibility that you’ll be the first Fil-Am to win an Oscar?

I was not aware of that! Wow. I hope, win or lose, that Filipino artists everywhere take my example as proof that you don’t have to look a certain way for your dreams to come true. It just takes hard work, perseverance and some luck.

What about the media and fans saying you also have a chance to join the “EGOT”-ers?

It’s very flattering to think about that—what a prestigious group! Of course, anything could happen at the awards and so my hopes are not high. And even if it does happen, it will not go to my head—every award I’ve won has been for work I’ve done with incredibly gifted collaborators. You won’t catch me saying, “How awesome am I?”

What are your thoughts on this awards season finally reaching  its climax on Sunday?

We can’t wait! We’ve been watching the Oscars at home in our pajamas our whole lives—what a thrill to actually be there as nominees. And to get to be married to your collaborator? So special.

What has been your most memorable experience so far this season?

It’s been a whirlwind, with so many wonderful and crazy moments flitting by. But recently, we did a photo shoot for Billboard magazine that had us in a very small room with Bono, Pharrell (Williams), Karen O and Spike Jones. We totally felt like this dorky married couple photo-bombing these actual pop icons (who couldn’t have been nicer). Recently, the issue came out and now it’s our favorite photo.

What are you looking forward to the most about attending the Oscars?

We can’t wait to hear the iconic Idina Menzel sing “Let It Go” live, in front of the audience.

Idina has been quoted as saying that in preparation to perform “Let It Go” on the Oscars show, she’s “working on the song with my teacher, because it’s not the kind of song you can wake up and roll out of bed and sing. It’s a challenging song and quite acrobatic, so I have to be in my best voice.”

We recently got a chance to try the song out with Idina at a little piano bar in Greenwich Village. She brought the house down. It was such a nice surprise. She is iconic on Broadway.

There’s a worldwide phenomenon that “Let It Go” has spawned, from homages, parodies and memes—even my nephews, ages four and 18, are singing it. When did you realize that it had struck a chord?

We love the YouTube videos—they are direct evidence of the impact that the song has been having on so many people, all over the world and seemingly on every age group. I think we realized the song was big when people kept using the word “obsessed” to describe their and their children’s feelings about it.

Which videos have you found interesting or memorable?

The one that comes to mind, probably because it’s the most recent one, is that of the TV traffic reporter from Cincinnati who parodied the song in his traffic report. He’s so geeky and great. I think the most popular one is the “Africanized Tribal” version that has something like 20 million hits on YouTube. That one is bizarre.

And how did your two daughters, whom you said in our previous interview inspired and helped you write the “Frozen” songs, react to this “Let It Go” phenomenon?

They were singing it long before the movie came out. Now they still love it, but they’re a bit like early fans of an indie rock band after the band has made it—they liked it before it was cool.

Why do you think the music and the movie, now the highest-grossing original animated release of all-time, resonated tremendously with people?

We have no idea. Usually, musical theater songs have no traction when it comes to the pop charts. We barely know how the music business works. We are grateful, though!

What are your hopes for adapting “Frozen” to the Broadway stage?

We are very excited to get started on the stage version. It will, by necessity, have more songs than the movie, so we can’t wait to re-imagine it.

What’s next for you when this awards season is over?

We will get back to work since there’s much to be done—but we get a nice little vacation over spring break with the girls later in March.

Robert, thanks and good luck!