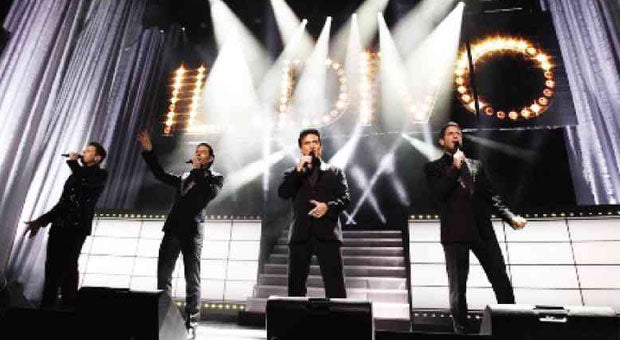 I don’t think I could have asked for a better birthday. It was spent in Seoul in the company of good friends, who bonded over amazing Korean meals (lunch was with a “Flower Drum Song” coactor, Kim Varhola, her two beautiful sons and her mother; dinner was with Kim again, her husband—and my sometime leading man—Michael K. Lee, plus two of their colleagues), and a bottle of Dom Pérignon 2003. Oh yeah, and I also got to perform with Il Divo.

Many of us may not be aware of the group’s creation and history: that Il Divo is the brainchild of Simon Cowell (the only “American Idol” judge I would actually listen to), and that the four men that make up the group are from different countries and backgrounds.

David Miller is an opera singer (tenor) from the United States; Urs Buhler from Switzerland is also a tenor; Carlos Marin is a baritone from Spain; and Sebastien Izambard, the pop singer, is from France.

Since this is the first time I’m touring in such an extensive fashion, visiting many Asian and American cities over the next few months (I officially finish my run on June 7 in Providence, Rhode Island), I’m trying to take in and learn as much as I can.

So far, this is what I’ve observed:

No lip-synching. Whatever comes out of their mouths is coming out right at that moment. Our first rehearsal was on Feb. 21, the day before opening night in Seoul. Carlos’ was the first voice I heard as we rehearsed “Memory” from “Cats,” one of the duets we perform in the show. He sat in his chair, and seemed like he was not trying very hard, but out came this rich, full-bodied voice. And then one by one, everyone else joined in. It’s one thing to hear their voices on CD or blasting out of speakers in concert, but without amplification in a hotel function room? I felt very fortunate.

I mean “ha-ha, laugh out loud” funny. Their banter and interactions behind the scenes are so much more fun to watch than what fans see onstage. At interviews and performances they are poised and prepared; backstage, they are boys. Fast, witty, and I mean that in only the best of ways.

This is a job, and it’s treated like one. No diva-sized tantrums; no one showing up hours late. (Urs is the most punctual, maybe because he’s Swiss and runs like a  Swiss watch.) They’re ready to go onstage for show time at the appointed hour, and if needed, they will keep tweaking the show with their director Andy (more on him below) until it’s right. There’s no sitting back with a bahala na attitude. “No, this isn’t working, let’s take this out, let’s add this in, this speech is too long …” is what I heard after the first shows.

Behind the scenes is a large crew of people that put the shows together: Andy Proudfoot is their tour director and production manager who makes sure that everything goes smoothly; Levi Tecofsky is the touring manager who helps with just about everything; sound engineers Matteo Cifelli (front of house) and Phil Down (monitors) make sure everything sounds amazing for everyone, including the performers.

Robert Morrison is the wardrobe god who keeps the boys looking spiffily dressed and pressed for every show; Ben Sullivan is the stage manager who runs the show; Stuart Merser is the video director for the monitors on the sides of the stage, and takes care of preparing the onstage teleprompters; Andrew Small is our musical director, playing drums in the orchestra (I was starstruck when he said he played for Swing Out Sister).

Cara Greczyn is the production assistant who takes care of hospitality, making sure everyone is comfortable; Simon Chalk is the conductor, and he’s been working with Il Divo for years on their tours; and finally, Peter Rudge is Il Divo’s manager who’s traveling with them on this tour, a powerhouse that has visited Manila before with Duran Duran. There are even more people that I haven’t formally met yet, and will do so in the next days.

Everyone is absolutely lovely to work with and be around. It makes for a great working atmosphere, one that makes you look forward to showing up every day.

There is a show bible that everyone looks at for the blocking and staging of each song, with updates sent via e-mail when any changes are made in rehearsal. The teleprompter rolls automatically with a time code matching the songs and video projections. Every single person on the tour has his or her own luggage tag, number- and color-coded. And we all have a copy of the itinerary, a book with contacts, flight info, hotel info, currency exchange rates, transportation pickup times, venue addresses and show times.

As the tour continues there will be more adventures to write about … but for now this will have to do. So, what’s going on at home? Anything interesting?