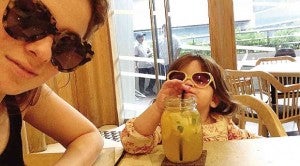 THE SINGLE mom (left) and 2-year-old Ellie. Photo from Instagram

As a single mother, Andi Eigenmann promised herself to raise her daughter “to become an honest person.” The actress also said she would allow Ellie, now 2, to meet her father if the child would ask for it someday.

“I will never lie to my daughter. I will make her grow up to be someone who is not afraid to be herself in front of other people,” the 23-year-old actress said during a press gathering for ABS-CBN’s latest fantasy series “Dyesebel,” where she plays the villainess.

Andi has identified actor Albie Casiño as Ellie’s dad, but the latter denied it.

“I don’t edit what I say to Ellie, especially if it’s about her roots,” Andi pointed out.

She said she had already embraced motherhood. “It’s not as easy as most people think, but at the same time, it’s not as hard, too. When I became a mom, I’ve learned that as long as you commit yourself to something, nothing will be too hard.”

Andi, who is rumored to have reunited with former boyfriend Jake Ejercito, insisted: “My daughter is my  priority.”

She said: “You will never run out of time for  important people.”

The actress, however, refused to go into detail about the real score between her and Jake, son of Manila Mayor Joseph Estrada.

Jake left Manila in 2012 to study in London.

“I know that since I’m part of show biz, I owe my story to the public,” said Andi. “It’s just that there are people in my life who are not celebrities. I hope people will respect it if I choose not to reveal too much.”

She also downplayed the controversy that Jake’s dad does not approve of her. “I don’t think he ever said that.”