No regrets turning down ‘Twilight’ 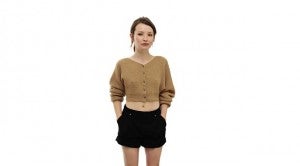 LOS ANGELES—Emily Browning has no regrets that she declined an audition for the Bella Swan lead role in “Twilight.” Author Stephenie Meyer had written in her blog before casting for the movie began, “Right now, my favorite choice is Emily Browning of ‘Lemony Snicket’s’ fame. Just look at those lips! Love her!”

Presumably on the recommendation of Meyer, Emily was asked to try out for the role that we all know eventually went to Kristen Stewart. “I definitely don’t think I would have been ready at that time to handle that crazy attention,” said Emily, star of such films as the current “Pompeii,” “Sucker Punch” and “Lemony Snicket’s A Series of Unfortunate Events,” on a recent afternoon. Her contrasting beige cropped sweater and black shorts complemented her beautiful pale skin.

“People knew that ‘Twilight’ was going to be successful but I don’t think anyone guessed that it was going to be as huge as it was,” added the Melbourne native who started as a child actress on Australian TV.

“If that had been me, I might not even be acting anymore because just thinking about the way they were constantly hounded by people after that film makes me feel anxious. I don’t think I could have handled that. I’m pretty happy with the choices and decisions that I’ve made. I don’t really have any regrets in that sense.”

Emily was quoted in another interview, “Kristen is just perfect for that role.”

She has found a niche in indie films, save for the occasional mainstream commercial movies like “Pompeii.” Her other recent credits include “Plush,” “Sleeping Beauty,” “Summer in February” and “Magic Magic.”

“I had a film in Sundance called ‘God Help the Girl’ which is a musical written and directed by Stuart Murdoch who is the lead singer of the band Belle and Sebastian,” she volunteered. “He wrote all of the music for the film. It’s about a group of young kids who form a band in Glasgow. We filmed it over one summer and it was really great. I’m very proud of it. Hopefully, the film will be coming out in cinemas some time soon.”

“In the film, we had to perform a few of the songs live,” she recalled. “It was the best feeling. It’s like nothing I’ve felt before standing (and singing) in front of an audience.

“Music is becoming more a part of me now,” she pointed out. “It’s something I’m interested in but I don’t think I’m going to release an album anytime soon. But I really enjoy having friends come over, singing with people I care about.” 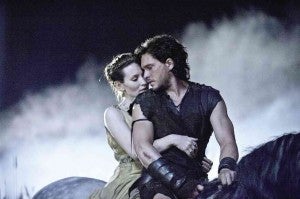 SHE PLAYS the lover of a gladiator, portrayed by Kit Harington, in “Pompeii.”

She clarified, “I am not trained as a singer. I always sang as a kid with my family in the house. My mom always wanted me to sing… It was only when I did ‘Sucker Punch’ where I sang a few songs for the soundtrack that I realized, I enjoy this. I really got a kick out of this.”

Of her fellow actresses in Zack Snyder’s “Sucker Punch”—Filipino-American Vanessa Hudgens, Abbie Cornish, Jena Malone and Jamie Chung–Emily  said, “I was away from LA for a long time so I didn’t see them for a while.

I’m still in contact with all of them, especially Jena who lives around the corner from me so I see her all the time. It was a magical thing to make that film and to have five girls who just happen to get along really well. We’ve maintained pretty strong friendships ever since, which is really great.”

Emily, who played Babydoll, a blonde asylum inmate who, in her fantasy world, leads her friends in battling dangerous creatures, said of Vanessa, “She is kind of maternal toward me even though I’m older than her. I was like the baby on the set. Vanessa is lots of fun and very free-spirited.”

In the disaster epic “Pompeii,” she stars opposite “Game of Thrones’” Kit Harington, who plays a slave-turned-gladiator in love with her character, Cassia.

On the brutal action in gladiator arenas and modern-day sports, Emily remarked, “There’s something that I don’t understand in wanting to see people hurt one another. When I was in Toronto (where ‘Pompeii’ was mostly shot), I got into hockey because that was what was happening there. Sometimes the players were just so incredibly violent. People would be cheering. I am thinking, I don’t understand this bloodlust thing. I don’t really get that.”

For this 25-year-old, bad boys are not attractive. “No bad boys, ever,” she stressed with a smile. She and actor Max Irons were together for over a year (they split in 2012). “I want someone who’s nice, friendly and respectful, and is going to make me laugh. I guess I’m boring like that. I know the danger quality is really exciting to some people. I’ve never really had that [attraction],  so it’s interesting for me to play roles where the girls want that danger in their relationships because it’s just not me. Not at all.”

She said, “Maybe that’s why I enjoy watching these tragic romances so much, because my boyfriends have all been nice, respectable, and they treat their mothers well.”

Speaking of tragic love stories, her current film sounds like one. Emily said, “I’m making a film for a few weeks here in Los Angeles called ‘The Shangri-La Suite’ which is another independent film. It’s about two young lovers on the run … who drive across America to assassinate Elvis Presley.”