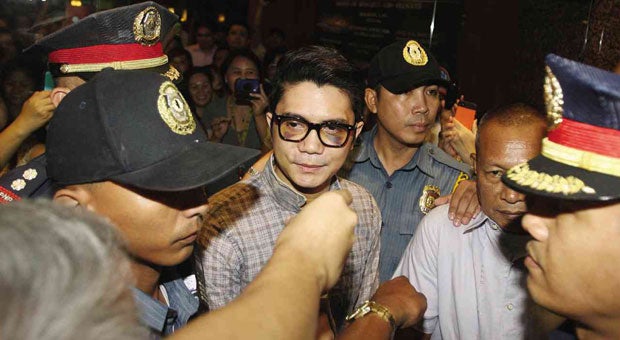 Actor Vhong Navarro finds himself facing another case after another woman filed rape charges against him on Wednesday afternoon. MARIANNE BERMUDEZ

MANILA, Philippines—Actor Vhong Navarro found himself facing another case after another woman filed rape charges against him on Wednesday afternoon.

Reporters tried to get a copy of the complaint-affidavit from the Pasig City Prosecutor’s Office but their request was denied.

A source who requested anonymity, however, said that the alleged rape happened inside a posh condominium building in Ortigas in 2010.

During an interview on Inquirer Radio, the woman’s lawyer, Virgilio Batalla, declined to identify her, saying he had yet to get her permission. All he would say was that the two had met on a television show.

But in a television interview, the victim came forward and identified herself as Roxanne Acosta, 24. She did not narrate how the rape occurred.

Batalla also refused to go into the details of the case, saying the victim had not allowed him to. All he would say was that she approached him and asked him for help days after Deniece Cornejo charged Navarro with rape.

The victim said that Cornejo’s move had emboldened her to file a case against the TV host-comedian, he added.

At the same time, Batalla denied rumors that the filing of the rape case was orchestrated by businessman Cedric Lee whom Navarro had accused of mauling and framing him for rape in order to extort money from him.

The rape accusations came almost a month after Cornejo accused the actor of forcing himself on her at her condominium unit at Forbeswood Heights in Taguig City on Jan. 22.

Her friends led by Lee and his sister, Bernice, however, supposedly arrived in time to stop him, she said.

“I think this is a distraction and maybe that is the purpose,” she told the Inquirer over the phone, without naming who might have “instigated” the filing of the case.

She said that her camp, after all, was busy concentrating on the cases of serious illegal detention and rape in the Navarro-Cornejo controversy.

She added that the new rape accusation was “not unexpected,” since her camp had heard early on that Lee “had been talking to several women.”

A lawyer for Lee’s group, she pointed out, had even declared at one point that a “bombshell” would be revealed amid the controversy.

“But this is not a bombshell,” Mallonga was quick to add.

She said her camp would “respond appropriately” as soon as they receive a copy of the new rape complaint.

“This has no effect on the cases [of serious illegal detention and rape previously filed],” she told the Inquirer, adding Navarro was already aware of the development.