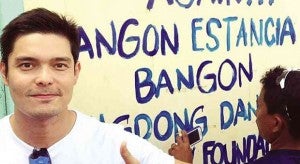 More than a hundred days after Supertyphoon “Yolanda” ravaged Central Visayas, relief operations for calamity survivors have shifted to rehabilitation, and stars from the country’s top networks remain active in the efforts—giving till it hurts.

GMA 7 actor Dingdong Dantes is waiting for the Department of Education’s go-signal to build a two-story school in Estancia, Iloilo.

ABS-CBN actress Angel Locsin will auction off a vintage car, a 1970 Chevrolet Chevelle, that she donated to her network’s Sagip Kapamilya Foundation. 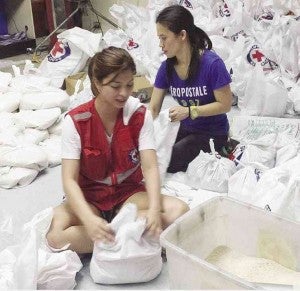 Singer-actress Kuh Ledesma, who recently appeared in the video of the song “Dear World” with daughter Isabella and former actress Cristina Gonzalez, intends to use viral marketing to raise funds abroad. Their goal: To help rebuild Bacolod, Ledesma’s home province, and Tacloban, where Gonzalez is a councilor and her husband, Alfred Romualdez, is mayor.

“I hope to encourage volunteerism. There are a lot of ways to help,” said Locsin, who confessed that her vintage Chevy “had been a very important purchase.”

Locsin admitted, “I felt guilty that I owned a luxury car while people in the Visayas had nothing. They lost family members and their livelihood.” 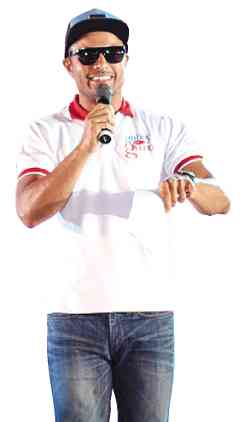 Former actress Marjorie Barretto wants her children to be socially aware. “My four kids didn’t want to watch the news. When the supertyphoon struck, I told them: ‘You have to know what’s happening,’” she told the Inquirer.

Garage sale
“After watching the news, they all rummaged through their closets. I heard one of them say: ‘We’re going to sell clothes!’ Only one-fourth of my daughter Julia’s clothes were left. She told me: ‘Mom, I have to give till it hurts.”

Their effort raised P135,000, which was then turned over to Ormoc City Rep. Lucy Torres-Gomez. “That’s a lot for a garage sale, considering that we only promoted it on Instagram. I think this was because everybody wanted to do their share,” Barretto said.

Dantes quipped: “It’s really not the amount you give, but your commitment to help that’s important. For me, this is not a once-in-a-lifetime thing but a life-long commitment.”

Dantes established YesPinoy Foundation to provide scholarships for deserving underprivileged kids. He said: “I will personally make sure that our scholars get the help they need all the way to their college years.”

Dantes’ goal is to put up a school building that’s “disaster resilient.” He explained: “It can withstand high-intensity earthquakes and can also serve as shelter in case of flooding. Urban

planning is important. We should learn from our mistakes.”

Once Dantes gets the green light from DepEd, his team will start the bidding for local contractors. The aim is to have the school built before classes begin in June. On the second phase of his Iloilo project, his foundation will provide 300 new chairs for the students of Estancia Central Elementary School.

“Filipinos are generous by nature,” Dantes said. “One positive effect of the tragedy is that we’re able to put our talents and creativity to good use.”

GMA Records released the music video of “Pagbangon,” performed by Julie Anne San Jose. The song can now be downloaded for P25 via OPM2Go. All the proceeds will go to the survivors through GMA Kapuso Foundation. 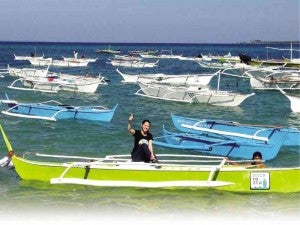 The Kapamilya gag show “Banana Nite,” led by actress Angelica Panganiban, has launched an auction site not only to benefit Yolanda victims but also the survivors of the 7.2-magnitude earthquake in Bohol. The cast of the comedy show was in Bohol when the earthquake struck last October.

Kapamilya young stars Paul Salas and Jairus Aquino, who are both basketball fanatics, organized a charity game with colleagues and friends.

Actress Marian Rivera, through her Adopt-A-Bangka project, recently handed over 100 fishing boats to affected families on Bantayan Island in Cebu.

TV host Bianca Gonzalez, meanwhile, wants to make sure that the financial aid from foreign organizations “goes to where it is supposed to go, that it does not get stolen.”

She took part in a rehabilitation effort on Malapascua Island in northern Cebu in December. The TV host related: “Assistance for housing, education, livelihood and communication projects have been sufficient. If everything goes where it is supposed to go, the affected cities can get back on their feet the soonest.”

According to Abunda, his foundation makes certain that assistance is given directly to the beneficiaries. “We help without intervention from other interest groups,” he remarked. “Sadly, mismanagement of funds do happen. This is something that we have to deal with. I just hope generous people will not be disheartened.” 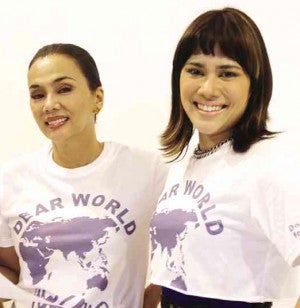 To jump-start the rehabilitation of affected areas, Abunda suggested that “we should go for the long haul. We should provide people with livelihood.” However, Abunda said that “as you try to help, you should realize that each family has unique problems. You cannot offer a blanket solution.”

Abunda recounted: “One father asked: ‘My son is sick. Is it okay to use the seed money to buy medicine instead?’ How would you react to that or to people who complained of having no food on their table?”

Atienza insisted that education should be prioritized. “Let us create projects tailor-made for the kids. The long-term damage will be felt by these children,” he said.

Will Fredo, who directed the “Dear World” music video, said “rebuilding will take years and they need further assistance, especially now that other incidents are hogging the headlines.”

Fredo said that Ledesma’s plan was to look for sponsors for the video in her concerts abroad. “The idea is to create more awareness in the international scene,” Fredo said. He expressed gratitude to the artists who participated in the music video: Jonalyn Viray, Al Gatmaitan, Kettle Mata, Guji Lorenzana, Timmy Pavino, Yojee de Jesus and Emilee Jane Joseph. “Dear World” is composed by Marq Dollentes and arranged by Bod Aves.

The recent two-night benefit concert “Do You Hear the People Sing?” at Resorts World Manila has raised P24 million, which will help build 200 homes for Tacloban residents. The event 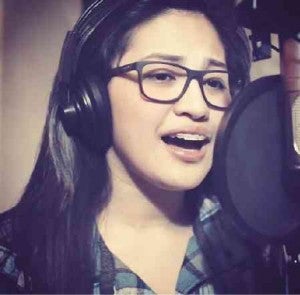 was topbilled by Olivier and Tony winner Lea Salonga.

For the rehabilitation efforts to be successful, Salonga said Filipinos should refrain from politicking. She asserted: “It’s so difficult to figure out what to prioritize since everything is important, but first things first: We must end politicking. After that, it’s back to rebuilding infrastructure. This will take a very long time and a lot of money.”

Filmmaker Jose Javier Reyes agreed with Salonga. “We should stop blaming each other and start doing something. We can’t expect the government to do everything for us. We should help each other.”

Reyes participated in a recent fundraising project called “Books for a Cause” organized by colleagues Jun Lana and Perci Intalan. “We stumbled on the touching story of a 15-year-old car-wash boy. He went to the book sale not really intending to buy anything because he has no money, but he was so thirsty for knowledge. When the event organizers saw him, they gave him all the unsold books,” Reyes recalled. “Tragedy is happening all around us. We don’t need a Yolanda to realize that.”