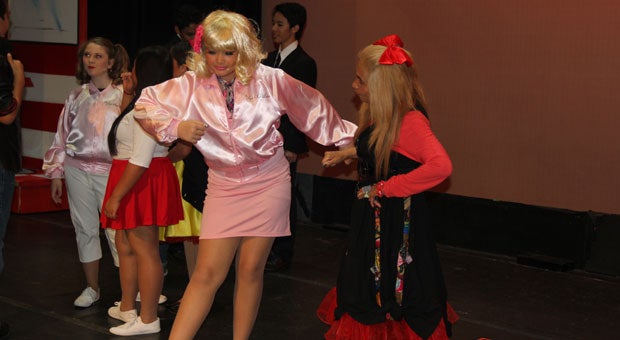 The casts of ‘Grease’

SAN JOSE — Two music schools staged a successful three-day run of the hit musicale “Grease” Feb. 8 to 10 at the Mexican Heritage Plaza. The largely Filipino American production was by the NorCal Academy of Performing Arts (Napa) in cooperation with Evergreen School of Music and Arts (Esoma), their first show of the year.

Selecting Grease as their project was due to the popular interest expressed by Napa and Esoma supporters.  Grease is one of the most popular plays performed in the United States, not to mention it is one of the longest running musicals featured on Broadway.

The cast and crew involved a 37-member cast supported by a 20-member production crew.  Additionally, there was a 10-member live orchestra accompanying the actors on stage.  The show relied on community volunteers backstage to assist with make-up/hair, costumes and before-show preparations.

With such a complex and difficult performance, cast and crew dedicated endless hours to rehearse lines, learn vocals, and practice the choreography until it was flawless.  For many cast members, it was their first time performing and they never had experience singing with a band but they were still able to adjust to having a live orchestra.

Director Anou said, “The performers improved each time and adapted to their schedules.  Despite the long and extra hours of rehearsals you can still see their faces glowing, joyful and full of excitement.  I am very pleased and proud of each performer because they looked great, confident and professional.  People were applauding and parents were truly happy watching their children perform on stage. The performers exceedingly did well with their dance moves, acting and singing.”

To give more stage time to performers, Napa had two full casts who each presented the show twice for a total of four show times.

“The cast most definitely exceeded my expectations,” Teodoro said. “It was such a riveting performance on each and every show. The technical challenge we had during the first day of the show did not stop them from delivering their lines, singing their songs and dancing to the tunes as if nothing could stop them. There was only about 10% of the cast who had experiences acting in theatre.”

The money raised from this event will benefit programs to give accessible aid to those pursuing interests in the performing arts field, especially those with special needs.  Part of the proceeds donated from sponsors will be allotted to aid the rebuilding of schools in Tacloban, Leyte Philippines after Typhoon Yolanda.