Hollywood descends on London for Baftas 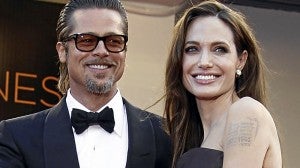 LONDON – Hollywood stars including Angelina Jolie and Brad Pitt rubbed shoulders with British royalty on Sunday at the Bafta awards, the highlight of the British film calendar and a key indicator for the upcoming Oscars.

The superstar couple made an unexpected appearance on the red carpet in matching tuxedos and signed autographs for hordes of fans camped outside London’s Royal Opera House.

The event is attended by Bafta president Prince William and is hosted for a ninth time by actor Stephen Fry.

He opened proceedings with a tribute to Helen Mirren, who is to receive Bafta’s highest accolade this year.

Fry joked that the actress – who has played Queen Elizabeth II on stage and screen – had “this year brought her grandson along. Welcome his Royal Highness the Duke of Cambridge.”

The British capital has recently suffered freak storms, but conditions were fine if cold on Sunday, allowing stars to dazzle on the red carpet.

Oscar-winner Emma Thompson arrived wrapped up in a red dress and white coat with a huge furry collar, while “American Hustle” star Amy Adams posed for photographers in a floor-length black gown from Victoria Beckham.

Leonardo DiCaprio, Christian Bale and Tom Hanks, all nominated in the Best Actor category, were also among the stars in London for the event.

The British Academy of Film and Television Arts awards are a useful guide to which way the Academy Awards might go on March 2.

This year “Gravity” leads the nominations, but the harrowing “12 Years a Slave” is tipped to win the top honours at the last major awards ceremony before the Oscars.

“Gravity” has 11 nominations; Golden Globe winners “12 Years a Slave” and “American Hustle” were each nominated in 10 categories, while “Captain Phillips” was nominated nine times.

“Behind the Candelabra” and “Saving Mr. Banks” have five nominations each.

“12 Years a Slave”, starring British actor Chiwetel Ejiofor as a free black man who is kidnapped and enslaved in the United States, is nominated in five of the big six categories.

Bookmakers have “12 Years a Slave” as the 1/8 runaway favourite for best film, with Ejiofor also odds-on for best actor at 1/4.

Cate Blanchett is 1/12 for best actress for her title role portrayal in Woody Allen’s “Blue Jasmine”.

“Gravity” director Alfonso Cuaron is a 4/11 favourite in his category.

The Best Film Award is being disputed between “12 Years a Slave,” “American Hustle,” “Captain Phillips,” “Gravity” and “Philomena.”

Dench is nominated in the best actress category for drama “Philomena” – a record 15th Bafta acting nomination taking her one clear of Meryl Streep.

Benedict Cumberbatch, Jeremy Irons, Kiefer Sutherland, Maggie Gyllenhaal, Stanley Tucci and Uma Thurman, will be among those helping to present the awards.

The Academy Fellowship, is being given this year to Mirren, “in recognition of her exceptional contribution to film.”

William, second in line to the throne and the academy’s president, will present her with the award.

The prince called the awards “a wonderful way” to recognise the UK film industry.

“Excellence permeates every award category, from compelling leading performances to ingenious production design,” he wrote in the official program.