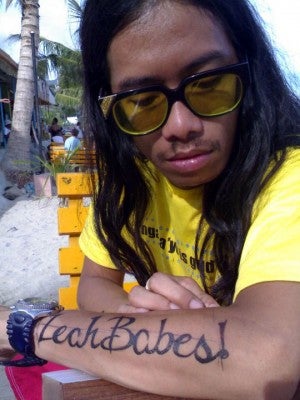 MANILA, Philippines – An artist’s group called their co-founder Arvin “Tado” Jimenez, who was among the 14 killed in the Bontoc bus accident, their “modern hero.”

“He is our modern hero. We honor him by treading the same path so that the nobility of his life will live on,” the group said on its Facebook account.

“His thought-provoking lines, witty commentary and signature style commanded the attention and rebellion of the public that sought for alternative heroes. His ideas, bordering from the insanely absurd to downright brilliant, spawned outstanding works that continue to influence this generation,” the statement read.

An activist and a popular culture icon, Jimenez was known for his offbeat humor in the hit television show “Strangebrew” and the radio program “Brewrats.”

The ill-fated G.V. Florida Transport supposedly had lost its brakes before plunging into a 100-meter ravine in Bontoc, Mountain Province on Friday. The accident killed 14 and injured 32 others, including the driver and conductor.

Comedian Tado Jimenez among 14 dead in bus accident in Bontoc