Aga, Angel dance for their lives in compelling drama 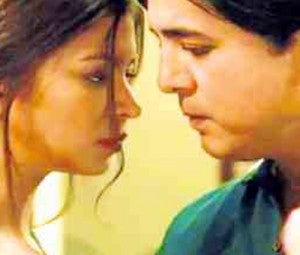 LOCSIN AND MUHLACH. Portray star-crossed lovers in “In the Name of Love.”

IT ISN’T everyday that we get a phone call from Aga Muhlach. So, when he invited us to a screening of Olivia Lamasan’s “In the Name of Love,” his first team-up with Angel Locsin, we knew how excited Aga was about his latest film—and with good reason.

The love story of Emman Toledo (Muhlach) and Cedes Fernandez (Locsin) will resonate with Filipino couples and families whose relationships are endangered by our country’s inability to keep them together: To make ends meet, they’re forced to adapt to difficult circumstances and compromise their principles. Alas, the knotty situations Emman and Cedes get embroiled in are as disturbingly timely as today’s headlines!

Emman, a former “hosto” in Japan, juggles odd jobs to save money for his estranged son, Nico. Washed up and emotionally exhausted, he’s just been released after serving seven years of his 13-year sentence for laundering money for the Yakuza.

But, as Emman quickly realizes, life outside is just as hard. There aren’t a lot of employment opportunities back home, so he brushes up on his dancing skills and gets hired as a dance instructor for the corrupt political Evelino family, headed by Gov. Toni (Leo Rialp, who’s almost unrecognizable here) and his wife, Chloe (Carmi Martin).

As their story unfolds, we discover the reason behind Emman’s aggrieved look and Cedes’ lonely stares—a shared past that has made them the cynics they’ve become. Hope still springs, however—and, before long, we witness how the couple valiantly struggles for their last shot at happiness!

Lamasan maps out her movie’s nonlinear exposition with clockwork precision, and effectively builds mounting tension as she puts the story’s intriguing pieces together. The film gains cumulative power as it combines to compelling effect the dynamics of intimate drama with the social aspects of its protagonists’ convoluted tale.

Unfortunately, its thematic grit and narrative impact are drastically diminished as it winds down to its bloated, predictable finale.

What vividly comes through is Lamasan’s ability as an actor’s director. Here, you focus on Aga’s thespic depth and acumen more than his handsome mien—warts, bulging belly, eyebags and all! His revealing monologue during his confrontation scene with Angel is quite long, but he pulls it off beautifully and limns his conflicting motivations with telling nuances.

Muhlach’s confident grasp of his character is complemented by Locsin’s smoldering screen presence and femme fatale countenance, which she projects with  understated forbearance.

More admirably, she resists the temptation to let her grim situation spiral downward into overdone pathos. Even the usually over-the-top Cuenca comes up with a proficient portrayal. Their compelling performances—along with those turned in by Martin, Rialp and Dante Rivero (as Muhlach’s sickly dad)—are good enough reasons to watch “In the Name of Love.”