‘Thrones’ star bulked up, then slimmed down for film role 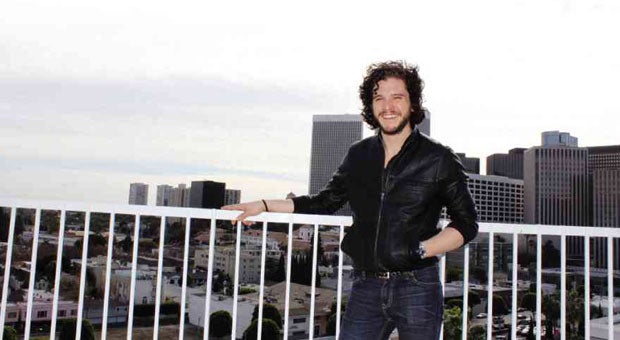 LOS ANGELES—“I ballooned in the face,” Kit Harington said of the result of weeks of bulking up to play an invincible gladiator in director Paul W. S. Anderson’s “Pompeii.”

The “Game of Thrones” star admitted in a recent interview at the Beverly Hilton Hotel, “It didn’t look good on me.” The actor, known for his dark, brooding good looks, was younger-looking in person, comfortable in a black leather jacket, shirt and jeans.

Speaking in a British accent and occasionally playing with strands of his long, curly hair, Kit recounted how he ended up with a puffy face which, he and the director agreed, didn’t suit the fierce gladiator character.

“I had five weeks prior to going out to Toronto [to shoot],” said the 27-year-old, whose full name is Christopher Catesby Harington. “I went through this regimen, bulking up. The initial idea for the role was that I would be as big as humanly as possible—rippling with muscles, absolutely massive so I’d look strong enough to take down all these guys twice my size. For five weeks, I was [ingesting] 4,000 plus calories a day.

Unfortunately, Kit’s face bulked up as well. “So when we came out to Toronto, we did something called ‘treading’—you [consume] 2,000 or under calories a day, so I went from being overstuffed to starving,” he quipped with a smile. “Just thinking back to it is painful. I had a nutritionist. I had three meals a day that would get sent to me. Finally, we got to a place where we were happy, which was [like  Robert De Niro’s body] in ‘Cape Fear.’ [I’d look] quick and lethal.” 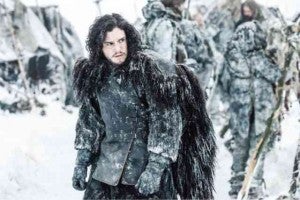 “GAME of Thrones” star is eager to get out of period costumes and play a modern character.

Vanity does “kick in,” the Worcester native candidly replied when asked about seeing himself transformed into Milo, a professional warrior. “It has to. Otherwise, you never get there.”

“That was a good incentive knowing that you’re going to be in a film which millions of people will see,” he said of “Pompeii,” which also stars Emily Browning, Carrie-Anne Moss, Kiefer Sutherland, and of course, an erupting volcano.

“You’re going to have your stomach out. I’d better look good. Acting is about vanity a lot of the time. I’d be stupid to say it wasn’t. It is about egos. As an actor, I love people watching me, so I love being in shape. I knew that Paul W. S. Anderson was a very visual director.”

Kit’s career is taking off spectacularly from his “first job… being a horse whisperer.” Of course, that job just happens to be the lead role in the original London production of “War Horse.” Kit landed the part even before graduating from London’s Central School of Speech and Drama.

By a strange coincidence, Kit’s roles, including the one in “Pompeii,” involve horses. “I had to work very closely with horses in preparation for that (role in ‘War Horse’),” he said. “And then, in ‘Game of Thrones,’ I’m riding horses a lot. I am not exactly a horse whisperer but I’m very adept on a horse. In this movie, I’m kind of a horse whisperer again. It’s strange because horses hate me—we have this love-hate relationship where I come on the set and I’m like, all right, we’re going to be working together, dude.”

Kit credited his parents, David and Deborah, for his love of theater and, eventually, acting. Deborah was a playwright. “She stopped writing plays when I was about 13. My parents have a real love for theater. They took me and my brother to the theater maybe twice a week, to see some phenomenal plays, and some absolutely terrible plays. Going that often to the theater had the opposite effect on my brother; he never wants to see theater again in his entire life.

“I have a real love and a passion for acting and theater and, now, for TV and film as well. It was just by osmosis. My mom and dad never pushed me into anything. They just saw what their children might be enjoying. They really encouraged that. Me, I was doing a lot of extracurricular performances. I was doing National Youth Theater in London. I was doing a RADA (Royal Academy of Dramatic Art) workshop and then drama school came around. That’s how it happened. I think my mom was happy about my choice. Dad was terrified. Somewhere along the line, it paid off, thankfully.”

He said there were two plays that made such an impact on him. “I saw ‘Waiting for Godot’ as an English touring company production. I was about 13 or 14. I loved it so much that I went and did it on my own as a piece of drama for my school. I put on a production. I played Lucky because I wanted to do Lucky’s speech.

“There was another play that made me want to go to drama school. I went on my own accord; it was “Hamlet” at the Old Vic, with Ben Whishaw [in the lead role]. That was what made me go, ‘I want to go to RADA.’ I ended up going to Central.”

Then the Edward role in “War Horse” came. “‘War Horse’ was just as big a thing for me as ‘Game of Thrones’ was, if not bigger, actually, because in drama school, you’re told, ‘Thirty of you get in.’ Ten thousand people apply to my drama school; 30 people get in and one person out of those 30 people is likely to work. So my aim coming out of drama school was to be a spear carrier in the RSC (Royal Shakespeare Company) and to get a minor role in a drama on ITV (Independent Television).”

“War Horse,” in Kit’s words, “turned out to be a hugely successful play so that I remember jumping for joy because that just meant work. That’s what you work your whole career to get and then ‘Thrones’ came along. It’s strange how a career goes. I was in exactly the right place at the right time for both of those roles. I still have a real love for ‘War Horse.’ Whenever I see a ‘War Horse’ poster, I have to give it a kiss because it means that much to me. I loved it. It was bloody hard work, though.”

Kit revealed that he did try to land the Albert part in Steven Spielberg’s film adaptation of “War Horse.” He recounted, “I got a lovely note back from Steven Spielberg saying, ‘I loved your tape. I am not going to take this further because I want to use a whole new cast.’ I thought that was a lovely thing to say.” Jeremy Irvine got the part.

Does he relate to “Thrones’” themes of revenge and retribution? “In my life?” he asked aloud with a smile and then went into a dramatic pause. “Hmmm,” said the actor who plays Jon Snow. “No. There are certain people but none that I’d like to kill in an amphitheater. Luckily, I don’t have a huge connection with those emotions. What I love about acting is, I get to try and play this person who [fought] in an amphitheater. It’s great to take yourself there as a character and to put yourself in that place.”

Asked if he has been to Pompeii, Kit replied, “I went after I finished filming. I had a fascinating day out there. It’s an amazing place.” 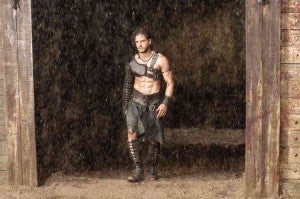 IN “POMPEII,” he rides horses and wields a sword once again.

With his film and TV commitments, Kit pointed out that he hasn’t really taken a break. He said with a laugh, “When people ask what I do in my spare time, I’m like, ‘I’m still looking forward to it.’ I like traveling. But when you travel for work, that’s always with an agenda.

“I booked a few days off. I’m going to go to Joshua Tree (California). I have rented a little place. I will sit underneath the stars and chill. I like reading. I love photography. Things that take me out of myself because I play quite inward dark characters.”

In that context, he enjoys the company of friends who make him laugh. “John Bradley, who plays Samwell (in ‘Thrones’), is the funniest man. I love people who take the piss out of me. I can be too serious. My best friends back home absolutely rip it out of me. You can’t take yourself too seriously. I tend to do that on screen so…”

He volunteered that he meets people who mistake him for another actor. “I arrived from Miami yesterday. There was a greeter who said, ‘I’m really enjoying ‘Game of Thrones.’ I’m so sad you died.’ This happens from time to time. People think I’m Richard Madden. And I get some very strange fan mail. I can’t wait to go home and read all my fan mail because there are some really entertaining ones that come.”

Kit is set to win more fans as his film career takes off. He’s set to star in “Spooks: The Greater God,” an adaptation of the cult British TV spy drama with its original actor, Peter Firth. “We’re just finalizing things. It was a very big TV series in the UK. They’ve been wanting to do a movie about it for a while. I really loved the script. It’s another lead role for me,  which is fantastic. I’m holding a gun, not a sword. I hope I can do it. At the moment, I am juggling with the dates.”

He sounded eager to do away with period costumes. “I see my career going in a different way now,” Kit said. “My next projects are going to be things very much based in this century and not so action-based.” Or, the previous century. He will star in “Testament of Youth,” director James Kent’s adaptation of a World War I autobiography.

(E-mail the columnist at rvnepales_ [email protected] Follow him at www.twitter.com/ nepalesruben.)