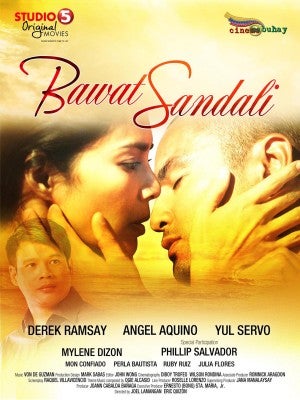 MANILA, Philippines—True to its commitment to bring the best of television to every Filipino home around the world, TV5 takes a groundbreaking leap in producing STUDIO5 ORIGINAL MOVIES, a precious collection of quality-produced made-for-TV movies featuring Philippine cinema’s biggest stars and created by the country’s highly acclaimed filmmakers.

Exclusively seen on Kapatid TV5 every Sunday, STUDIO5 ORIGINAL MOVIES offers the unique full-length films every week for the enjoyment of the whole family. Comprising the Love Month series this February are the first four film offerings that are bound to captivate the heart of viewers with their moving stories of self-discovery, destiny, second chances, and true love.

Airing on February 9 as STUDIO5 ORIGINAL MOVIES’ opening salvo is LADY NEXT DOOR, top-billed by timeless beauty Alice Dixson and Artista Academy’s teen heartthrob Mark Neumann as they star in a romantic story that defies age and challenges the accepted norms in society. This is a story of a troubled teenager Jake (Neumann) who falls obsessively in love with Hanna, a much older woman who is emotionally struggling with her personal problems. Despite their age difference, they find happiness in each other’s company and, before they know it, realize that they have fallen in love with each other. Will their love withstand the test of time?

Set to make cinematic history on TV is the Valentine’s Day special airing on February 16 – WHEN I FALL IN LOVE, the highly awaited onscreen reunion of the most iconic Philippine love team of all time, Guy & Pip. In this tearjerking family saga, Superstar Nora Aunor and multi-awarded dramatic actor Tirso Cruz III reunite as a couple faced with the ultimate test of true love. Almost a year before their 40th wedding anniversary, Armando Buenaventura (Tirso Cruz III) is diagnosed with stage four pancreatic cancer. Being a doctor, he knows his slim chances of recovery and decides to forego treatment and instead spend what little time he has left with his family. Most importantly, he wants to renew his vow with his beloved wife Fely (Nora Aunor) on their 40th anniversary. What follows is a compelling tale of how they relive their beautiful love affair and share the meaning of true love with their three children: Ricky (Marc Abaya), Nica (Nadine Samonte), and Louie (Felix Roco). 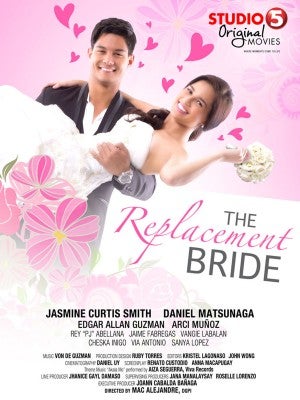 On February 23, STUDIO5 ORIGINAL MOVIES presents TV5 primetime princess and Cinemalaya best supporting actress Jasmine Curtis-Smith and Brazilian-Japanese hunk Daniel Matsunaga in the romantic comedy THE REPLACEMENT BRIDE.  Jasmine plays the role of Chynna, a broken-hearted lass who makes the mistake of ruining the wedding of Kael (Matsunaga), a successful architect who was about to marry his girlfriend of three years if not for Chynna’s intrusion. Determined to make Chynna rectify her wrongdoing, Kael forces her to do everything to win back the heart of his girlfriend Sandy (Arci Muñoz). Will Chynna succeed in her mission or will she replace the bride in the groom’s heart?

The grand finale to the Love Month series airs on March 2, with the breathtaking story and powerhouse cast of BAWAT SANDALI. Featuring Derek Ramsay, Angel Aquino, Yul Servo, Mylene Dizon, and Phillip Salvador, BAWAT SANDALI presents a tragic love affair and a crime mystery that unveils the most shameful discovery.