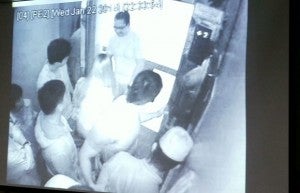 Personnel and officials of Megaforce Security Inc. were ordered to appear at the office of the PNP Supervisory Office for Security and Investigation Agency (SOSIA) in Camp Crame at 10 a.m. Monday.

Chief Supt.Tomas Rentoy III, PNP-SOSIA chief, said the personnel of the security agency were “directed” to shed light on the controversial events inside Cornejo’s rented unit at Forbeswood Heights condominium.

Rentoy said the security guards would have to explain their actions after seeing the group of businessman Cedric Lee bringing out Navarro from the condominium.

Footages from the closed circuit television cameras of the building showed Lee and several men leading the actor to the elevator with his hands tied on his back.

Rentoy said his office actually deferred its summons for the security guards since the National Bureau of Investigation had started its probe into the Jan. 22 case.