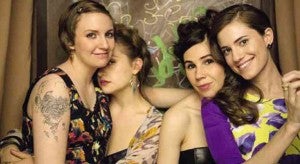 LONDON—“You have to figure out a way to just tune out the attention and keep doing your work—so far, we’ve been able to do that,” “Girls” creator-actor Lena Dunham said in a roundtable interview held at the Soho Hotel, the morning after the show’s third season was launched here.

“We told a heavy story at the end of season two,” she said. “There were so many stories there, that were so meaningful for me to tell. I just felt very lucky that we got to do it.”

Asked by the Inquirer if the new season would focus on the recovery of the reeling main characters, she responded, “Yeah, I think that’s a great way of putting it. Everyone’s [gone] through really dark things… God, that’s so helpful. I’m gonna steal that from you!”

On juggling multiple responsibilities—she writes, directs and is among a number of executive producers—Dunham said she also “feels lucky” to multitask. “Writing is my first love and where it all comes from, a really important part of my self-expression. Sitting down and writing the story is what makes it all clear to me. But I really love the craft of directing. I really like the part of my brain that acting exercises.”

She related that she has learned to “shut down” when the demands threaten to overwhelm her. “I meditate, which is helpful. I make sure that I have those breaks even when I don’t feel like I want them because I do think when you’re getting so much feedback on your work, it’s so easy to collapse.” 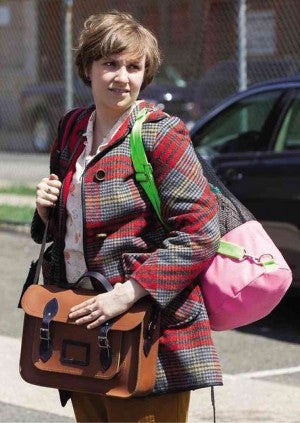 DUNHAM is writer, director, actor and executive producer for the HBO series.

Counting filmmakers Nora Ephron and Jane Campion and poet Dorothy Parker among her idols, Dunham said writing female characters that some have described as “real” doesn’t necessarily speak for anyone else in her generation.

“Our generation’s so multifaceted and no one person can speak for [another] person, a gender, or political issue, so I never claim anything like that,” she explained. “[But] we hope we

On fans confusing her with Hannah, Dunham said she isn’t bothered. “She has a funny, anxious posture that’s a little bit different than my own…but we both love writing. We both have passionate relationships and ask stupid existential questions.”

The show has gotten its share of accolades, including a Golden Globe award for Best Television Series, as well as a Best Actress award for Dunham in 2013. In 2012, she won a Directors Guild of America award for Outstanding Directing (Comedy Series).

Apart from penning the characters’ destinies, she is involved in creating mood for her stories. Dunham gushed about being able to work again with trusted collaborators: “(Singer-songwriter) Michael Penn still writes our entire score and Manish Raval is our music supervisor. The guys who work on music with me are so smart and they understand my taste!”

Playing Hannah requires Dunham to bare her buxom figure in intimate scenes. She praised her frequent screen partner, Adam Driver, who plays her “sociopath” lover Adam Sackler. “I’m so comfortable with him; we’ve done so much together—sex scenes, fight scenes, casual scenes. He’s such a talented person and I’ve learned so much from him. I adore him,” she said.

Viewers’ reactions to the show vary, but Dunham said that some stand out. “[They’d say,] ‘this gives me a better understanding of what my daughters are going through.’ On the other hand, there have been guys who said the characters terrified them, and others who said ‘I personally relate to them because they’re just people. It’s not about them being women.’ All those reactions are wonderful to me.” 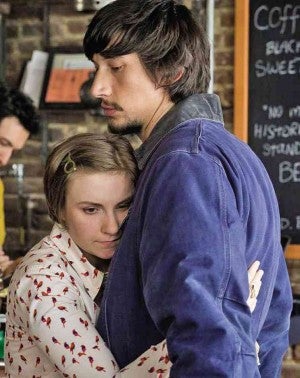 WITH ACTOR Adam Driver: “I adore him.”

Dunham is on the cover of Vogue’s February 2014 issue. The magazine dubbed her “The New Queen of Comedy.”

“It makes me feel like a slightly more acceptable-looking person for one week,” she said, smiling. “It’s really an amazing opportunity and it made my mom very happy. We always subscribed to Vogue. It was present in our house.”

Despite the busy “Girls” schedule, she revealed that other things are being worked on and talked about. “I have the best job in the world…I have a book coming out this year. I hope to do films…People have been asking about a [‘Girls’] film. It’s hard to imagine that right now, but never say never,” Dunham said.