Yes, we heard the people sing 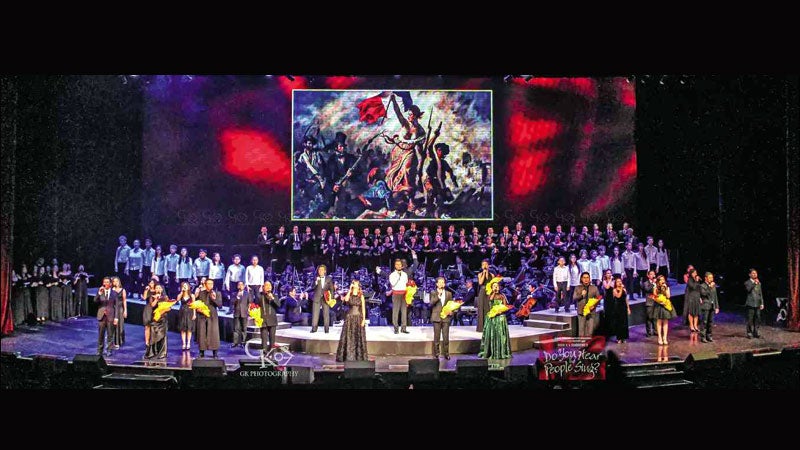 THE ROUSING finale of Wednesday night’s “Do You Hear the People Sing?”

Speaking to an audience that had risen to its feet in a packed 1,500-seat theater, French musical-theater composer Claude-Michel Schönberg thanked the Philippines for singer Lea Salonga, “your national treasure,” who, he said helped him and lyricist/librettist Alain Boublil put together a spectacular two-night fundraiser for “Yolanda” survivors that opened Wednesday night.

“I am happy to say that, with this, all of us together have raised P24 million to build 200 houses,” Schönberg announced, prompting wild applause. The houses will be built through Habitat for Humanity Philippines. 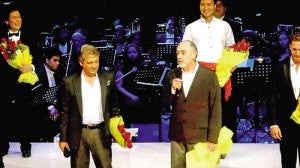 It was as though the well-heeled crowd that had gathered at the Newport Theater in Resorts World Manila was caught in the spell of one long, standing ovation that was hard to break at the end of the concert, “Do You Hear the People Sing?” (DYHTPS).

Salonga led the multi-layered cast of the Manila stop in the show’s Asia-Pacific tour. The show’s title was borrowed from the rousing finale of “Les Miserables,” world-renowned musical (based on Victor Hugo’s novel, acclaimed as one of the 19th century’s greatest) by the awarded Boublil-Schönberg tandem. DYHTPS features hits and highlights (as well as some numbers that have been edited out) from the duo’s best-known works, most notably “Les Mis” and “Miss Saigon.” 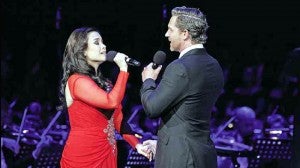 “It took us all of two and a half minutes,” Schönberg recounted, “to convince Lea and Gerard (Salonga’s brother, who conducted the ABS-CBN orchestra for the two-hour production) to do this here.”

Salonga was the most likely collaborator, of course. Schönberg and Boublil said in a joint statement printed in the program: “We [wanted] to give back to the Philippines a small share of what we owed the country that gave us Lea and several cast [members] of ‘Miss Saigon’ worldwide for the past two decades.” 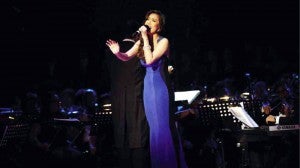 Salonga originated the lead role of Kim in 1988. She went on to win the Olivier, Tony, Drama Desk, Outer Critics and Theater World awards for it.

Onstage on Wednesday, pre-finale, Schönberg stressed that the concert was “by Filipinos, for Filipinos.” He was thankful as well “for my Filipino daughter; she is 21 now.”

One other strong tie that he keeps with the country is the Sun & Moon Foundation Home for Children in Parañaque, which he founded in 1994 with some Filipino friends, and which he regularly visits. 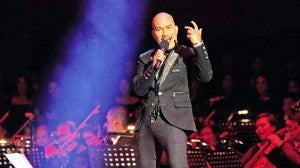 Wednesday night’s fundraiser was punctuated with vigorous applause and cheering. Salonga, reprising her “Miss Saigon” showstoppers, was clearly the star. “I was 17 when I first sang these songs,” she quipped. “They just don’t grow old.” Her voice was in complete agreement with that, and so was the extremely appreciative audience.

Guest soloist David Harris, Australian singer/actor, was the proud ladies’ man, who got to kiss the girls—Salonga, Marie Zamora (another guest soloist, from Paris and New York productions), and Carla Guevara-Laforteza, Filipino “Saigon” understudy for the Kim and Gigi roles in London, 1995-1997. 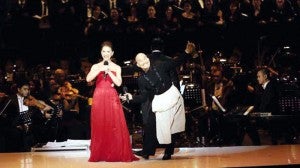 The Manila concert showcased other local entertainers who have performed in various Schönberg-Boublil productions around the world—led by Leo Tavarro Valdez and Jon Joven.

Valdez reprised The Engineer’s signature song, “The American Dream,” from “Saigon,” and reaped raves. Later, doing the riotous “Master of the House” (from “Les Mis”), he and Menchu Lauchengco-Yulo had the audience in stitches. 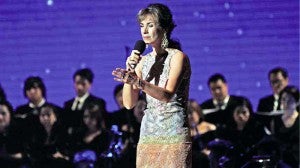 Jed Madela’s “Martin Guerre” was warmly received; Salonga and Rachelle Ann Go—who leaves in March for the “Miss Saigon” revival in London—singing “I Dreamed a Dream,” was a supreme treat.

Not one of them collected talent fees. But they performed as though they had been paid the equivalent of their weight in gold, to match the glimmer of joy in their hearts.

Read Next
Saving promising comics from themselves
EDITORS' PICK
In appreciation: Kobe Bryant, a life defined by hard work
4 Ways Jollibee’s new store will serve a leveled-up kind of joy to Filipinos in the South
SM continues to send relief assistance to remote towns in Batangas
Get exciting deals and discounts when you download the new McDonald’s App
‘House of Kobe’ launched in Valenzuela City hours before hoops star’s death
DOH warns vs eating raw meat, exotic animals amid coronavirus outbreak
MOST READ
3 Chinese admitted to San Lazaro Hospital after showing signs of flu
College baseball coach, wife and daughter die in crash that killed Kobe
Afghan passenger plane crashes in Taliban-held eastern area
Kobe Bryant’s helicopter flew in fog that grounded other choppers
Don't miss out on the latest news and information.