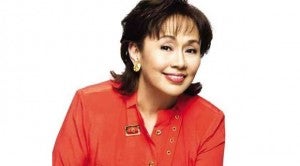 Right off the bat, 2014 is turning out to be a happy, hyper-happening show biz year, with the new entertainment season’s “big bang” celebration being paced by Vilma Santos’ Best Actress award at a film festival in Bangladesh for her performance in “Ekstra,” her first indie outing.

With that signal sign of encouragement and approval, we can bet that Vilma will be making more indie movies in the (hopefully near) future.

Interesting aside: In addition to acting, Vilma may also produce and direct her follow-up project. Many years ago, she tried her hand at directing and found it excitingly challenging.

So, now that she’s a senior artist who’s come into a fuller appreciation of what she should do and what she’s capable of, she could find herself behind the camera again, calling the shots!

From far-off Israel, Rose Fostanes recently topped the “X-Factor” singing tilt—but, her joy was dampened by the discovery that she couldn’t have a singing career in that country, because her working visa was specifically limited to her duties as a caregiver.

The news depressed not just Rose but also some of her newfound fans and followers—but, they aren’t crying now, because Israel labor officials have judiciously revised their decision, and the Filipino singer is now free to launch her entertainment career over there: Ms Fostanes is now officially Licensed to Sing!

Bravo to her, but we hope that she pays the Philippines a performing visit real soon, to share her happiness and talent with us, before the excitement over her victory dies down!

On TV, ABS-CBN has launched a new channel, ABS-CBN Sports + Action—a wisely calculated move, because sports events and stars are very popular in these parts. Welcome!

For her part, Rachelle Ann Go is getting ready to fly off to London to play Gigi in “Miss Saigon,” right after her imminent farewell concert.

Sure hope she makes it a point to get a lot of valuable tips from Isay Alvarez, who originated the featured role and played it for years in the hit musical’s original production.

As for Isay, aside from “Katy!,” for which she’s won a Best Female Performer in a Musical honor from the Aliw Awards, she’s performing with Robert Seña and Aicelle Santos (the younger Katy in Spotlight’s “Katy!” production) in “Rak of Aegis.”