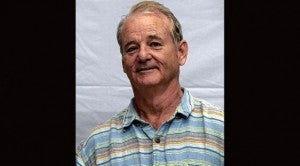 LOS ANGELES—“It’s staggering,” Bill Murray gushed when asked about “The Grand Budapest Hotel,” his seventh collaboration with director Wes Anderson. Laid-back, droll and looking bemused as usual on this afternoon, Bill shifted between “you” and “I” in referring to himself. Aside from raving about “The Grand…,” Bill also talked about George Clooney (who directs him in “The Monuments Men”), and whose house he has been staying in while he was in LA, fellow “Saturday Night Live” alum Tina Fey and Amy Poehler as Golden Globe hosts and, in a rare moment, discussed being a father to six sons—the joys and challenges.

Excerpts of our interview:

You worked again with Wes Anderson in “The Grand Budapest Hotel.” Have you seen it?

It’s going to blow your mind—it’s really impressive. Wes just keeps getting better. I just saw it. I didn’t compose a letter to him yet, but I said to him, “I think you make these movies just to please me,” because I’m so delighted by the way he works. And the way he writes his movies, obviously he has  an idea. But, the dialogue in them he takes from life. I have seen his movies where I go, “Wait a second…” He will say, “Yeah, you said that.”

Like if we were in this room, Wes would take something that someone said, and it would end up in one of his films. He made the making of the movies the way he lives his life. When we made “Moonrise Kingdom,” we worked in Newport (in Rhode Island). He rented a mansion and lived in it, with an editing room, and the cinematographer, myself and a handful of the actors. It was like a dormitory. We had a cook. It sounds like a great deal that we had a private cook, but it  meant that you could work endless hours because you’d say, “We are going to have dinner waiting for us at midnight.”

Wes wanted to live in Paris, so he edits his films in Paris. He wanted to shoot here, he goes there, he does this. We shot ‘The Grand Budapest Hotel’ in Germany and rented a small hotel. We had the whole place  to ourselves. It was like the actors’ old folks home. We would pad down in the morning in our robes, have coffee, and the make-up room was just in another part of the lobby. We would get made up and go to work. Wes is really having fun! I believe in having all the fun you can have while  working. The more fun you have, the better you do. He’s made the fun of making movies the fun of his life. He’s doing great work!

“The Monuments Men” is about protecting art and saving culture. What films do you hope will still be preserved 100 years from now?

The films I grew up with will be there, the films that win prizes and, of course, the ones that don’t win prizes, that people only value later on, like “Citizen Kane” and “It’s A Wonderful Life.” I would hope that “Kung Fu Hustle” would be there.  That’s the one I really enjoy watching.

What do you think of your fellow “Saturday Night Live” alumni, Tina Fey and Amy Poehler as hosts of the Golden Globes?

They are wonderful when they’re together. I love them. Together, they are more powerful than the sum of their parts. I didn’t see so much of the show this year,  but the parts that I saw were good. But, last year, when I went to the Golden Globes, they were ridiculously funny. Probably the funniest I have ever seen anyone host a show. I used to think Bob Hope was funny hosting  the Oscars, but I never saw anyone host a show as funnily as those two did last year. They should just host everything, really. They  do a fine job.

It’s often said that it’s difficult to convince you to accept roles. Why?

I’m basically lazy. I work really hard when I work, and if you do it correctly, you are exhausted. I work as hard as I can, and I am completely empty when the job is done. That’s an experience in itself. I don’t know how I learned that or why, but that’s how I like to do it. There’s just no limit to how hard you can work. You can work like a dog. and I choose to work this hard.

George is the only person who works harder than I do. He’s exhausted when it’s done. He has a lot of energy. I think he’s drinking human blood or something. But, he really loves doing it (directing/writing/acting). I also like my job. It’s the only job I’m good at. But, the project has to be really good for me to show up. I don’t leave the house. I have other things on my mind.

How did George reach you for “The Monuments Men” role, since you don’t have a cell phone or an e-mail account?

We have mutual friends. When George wants to hear from me, it’s like “Casablanca.” I hear it from someone else.

What do you like to do when you aren’t working?

I got a lot of kids (all boys—four with Jennifer Butler, and two with Margaret Kelly), so it’s a completely different lifestyle. It (raising kids) is the one thing that’s kind of overwhelming. It’s also another thing where there’s no limit to how hard you can work at it. In recent years, it’s more and more my occupation. So, my life is full in those two ways.

My kids are fun and amazing to watch. You know you like to take care of them. I’m learning more and more. I go through phases with them. Where I will say, “OK, I love you, but I also have the right to ignore you,” which is very important. You have to ignore them, especially when they’re trying to drive you nuts. But, it’s fun, too. I find that the less I try to influence them, the more I influence them. The less I try to tell them anything, the more they listen to what I’m saying. I still have very far to go, of course. I find myself going, duh, like I should have known that in the first place. But, you can’t resist the impulse to be Mr. Know-It-all.

I have a couple of sons who are pretty funny. I have one son who was in “Moonrise Kingdom.” He really enjoyed the experience.  He said, “How would I let someone know that I would like to do this again?”—which was a funny thing to say.

What is his name?

His name is Cooper (he played Indian chief Khaki Scout in “Moonrise…”). But, I wouldn’t necessarily encourage any of my kids (to go into acting). I encourage them to do whatever they want to do. But, I would never try to push. This is a hard business. Most people have not been so lucky. I was lucky to get in with all those talented people, to be an insider, and to get to see them work like that. Without those, I never would have achieved anything like this.