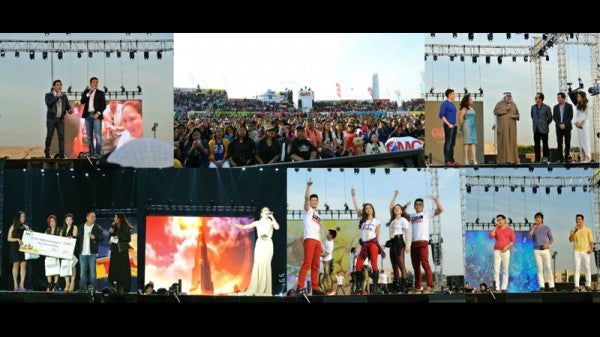 DUBAI—By way of back-to-back shows of “ASAP Live in Dubai,” ABS-CBN TFC on Jan. 24 brought Filipino sights and sounds to the 19th edition of the internationally acclaimed Dubai Shopping Festival, a 32-day festivity that drew thousands to Dubai Festival City.

The event also solidifies OSN, the largest pay-TV network in the region, as the new exclusive hub for TFC subscribers in the Middle East.

More than 40 of the biggest and brightest stars in Philippine entertainment had the city pulsating to the vibes and musical flavors of the No. 1 variety show in the Philippines.

The shows touched on themes of patriotism, Filipino pride, popular love theme songs from classic teleseryes, helping the homeland, while offering sizzling dance numbers in colorful, dazzling costumes before a gigantic screen backdrop of images that visually transported the audience to amazing landscapes.

“TFCKat,” TFC’s global singing contest, also held its regional finals. When the smoke cleared, it was Ana Blaza of UAE who won the Middle East crown, with her unique rendition of “Unwritten” by Natasha Bedingfield.

The three executives paid tribute to the Filipinos in the Middle East, praising their excellence at work that made them preferred employees, and agreeing that they deserve the best that the ABS-CBN TFC-OSN partnership has to offer.