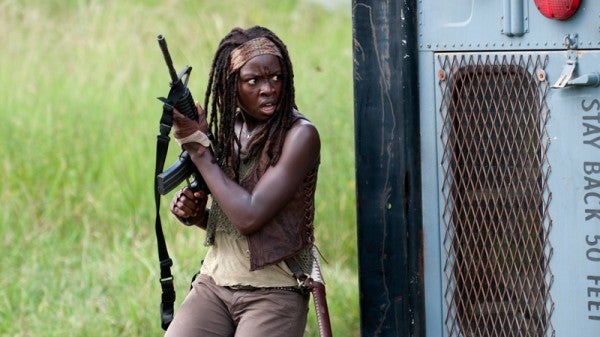 This file publicity image released by AMC shows Danai Gurira as Michonne in a scene from the series “The Walking Dead,” which resumes episodes from its fourth season on Feb. 9. When she’s not killing zombies on the rural Georgia set of The Walking Dead, Gurira is in Atlanta shopping for costumes for her own production or directing performances of it in Zimbabwe. AP

ATLANTA – Growing up in Zimbabwe and visiting South Africa as a young woman helped forge Danai Gurira’s passion for producing theater in Africa.

As a young girl, she saw how females could be placed at the margins of society.

As a college student, she saw the power of artistic expression in South Africa, where creative people used theater and other art forms to fight apartheid.

The playwright and actress said those experiences “seeped into my soul.”

Now, when she’s not filming on the Georgia set of “The Walking Dead,” Gurira devotes much of her time to Almasi Collaborative Arts, the nonprofit she co-founded that seeks to foster collaboration between Zimbabwean artists and American theater professionals.