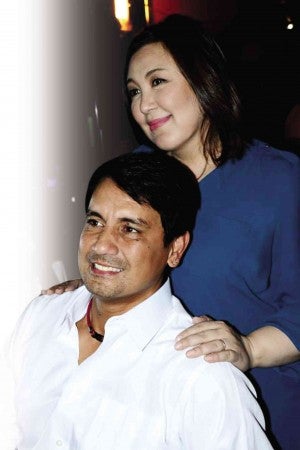 RICHARD Gomez and Sharon Cuneta may be paired anew in “My Pirated Family.”

The show, about a kind-hearted cook who has to deal with a philandering husband and duties as barangay chair, has reportedly settled for single-digit ratings despite a strong support cast. It is directed by Joel Lamangan.

News programs and teleseryes on rival channels dominated the prime-time slot. Even so, insiders pointed out, the show—originally slated for only 13 weeks—was extended for another seven.

“The cast and staff are sad about this,” says Cuneta, “so we avoid talking about it.”

This is Cuneta’s second show with  TV5. The gabfest “Sharon: Kasama Mo, Kapatid” lasted eight months before the curtains came down. Her only remaining show on air is “The Mega and the Songwriter,” a musical-variety show that she cohosts with Ogie Alcasid.

Mega (for “megastar”), as Cuneta is known in the biz, is expected to take a break before working on the planned series with Gomez.

Details of the new show, whose working title is “My Pirated Family,” are being finalized. Insiders say the proposed story revolves around a “fake” family that the lead character (Cuneta) teams up with to claim an inheritance.

The actress says she may do a made-for-TV movie at the end of the year. She is also set to sing the theme of one episode of a weekly drama anthology, “Minamahal.”

“It’s like, there’s going to be a song of the week, based on which they will write a story that will be dramatized,” Cuneta explains.