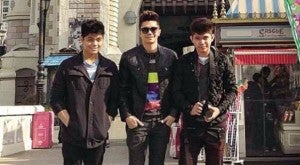 MANILA, Philippines—His nose broken and eyes swollen shut, comedian and TV host Vhong Navarro is set to file criminal charges against the group of men who gave him a severe beating Wednesday night at a condominium unit at Bonifacio Global City in Taguig, according to his talent manager Chito Roño.

Until then, the ABS-CBN star would be under observation at an undisclosed hospital, where doctors would wait for the swelling to subside before deciding on any operation, Roño told the Inquirer on Saturday.

The actor’s eyes were still swollen and the attack also left him with a nasal fracture. “We will confirm (subsequent medical findings) and other side effects in a couple of days,” he stressed.

He said Navarro’s legal team was preparing to take action against the group, who remained unidentified and whose motives remained unclear.

A report on the GMA website on Saturday said a complaint for “attempted rape” was filed by a woman against Navarro in the blotter of the Southern Police District office in BGC on the night of the mauling.

The alleged attempt was foiled when two friends of the woman came to her rescue, according to the report.

But the blotter entry also indicated that the woman decided not to press charges against the celebrity, it added.

Roño earlier disclosed that Navarro went to the condo unit upon the invitation of a female friend.

“For reasons still unknown, he was blindfolded, tied up and beaten by a group of men,” Roño said. The men also issued further threats before leaving him and tried to extort money from Navarro.

“Justice must be given to Vhong Navarro for the inhuman treatment he received from thugs,” Roño said in a statement. But he declined to give additional details on the incident, citing security concerns.

Roño said the 37-year-old Navarro would take an indefinite leave of absence from the ABS-CBN noontime program “It’s Showtime,” where he is seen on weekdays and Saturdays.

Navarro has been a talent of the Kapamilya network for 15 years. He joined show business as part of the dance group Streetboys, but became popular when he took on the role of Rico Suave, the ultimate ladies man, in the Joyce Bernal comedy “Mr. Suave” in 2003.

Navarro’s marriage to former actress Bianca Lapus was annulled in 2008. They have a teenage son named Isaiah.

He also has a son named Fredriek with a former girlfriend outside show business.