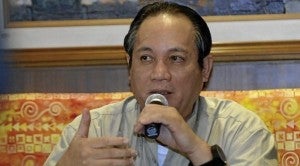 Now it can be told.

For the past several weeks, talk around the local indie scene was that longtime benefactor Antonio “Tonyboy” Cojuangco had pulled out of the Cinemalaya Philippine Independent Film Festival.

Cojuangco’s support has been a major source of funding for the annual event—the country’s highest-profile indie film fest—set to mount its 10th edition this year. (It has spawned at least five similar competitions).

Organizers on Thursday confirmed news of Cojuangco’s departure, at least for 2014.

Nestor Jardin, president of Cinemalaya Foundation, explained, “Mr. Cojuangco will continue to be active as chair (of the foundation). He will now focus on the long-term sustainability of the festival.”

Rances concurred: “Mr. Cojuangco will still support the festival, but with limited funds.”

As a result, Jardin said, “We are currently exploring other sources of funding.”

This year’s funding will come mostly from the CCP, one of the festival’s original main proponents, Rances volunteered. “For Cinemalaya 2014, the government, through the CCP, will provide the grants.”

“CCP funds come from the national government, through the Department of Budget and Management. Cinemalaya funding was included in the CCP budget for this year,” Rances clarified. “We have agreed to monetize past Cinemalaya films to help sustain the festival.”

There is no truth to the rumor that Cinemalaya is bound to fold up with Cojuangco’s diminished involvement. As far as its officers are concerned, it’s business as usual.

“Cinemalaya will remain operational,” Jardin said. “We will be busy in the next few months preparing for our 10th anniversary.”

The screening committee is deep in the process of choosing the 10 New Breed and five Directors’ Showcase entries this year.

“Deliberations for the selection of the finalists are set first week of February,” Jardin said. “We will still give P500,000 to each finalist in the two categories. We will organize a film financing/pitching forum with the finalists and prospective producers on Feb. 15.”

Organizers have also moved the fest from July to August, that is, Aug. 1-10. Jardin said, “We want to avoid the big Hollywood movies (often shown in July) because our films will be screened in Ayala cinemas (as they have been for the past three years) aside from the CCP.”